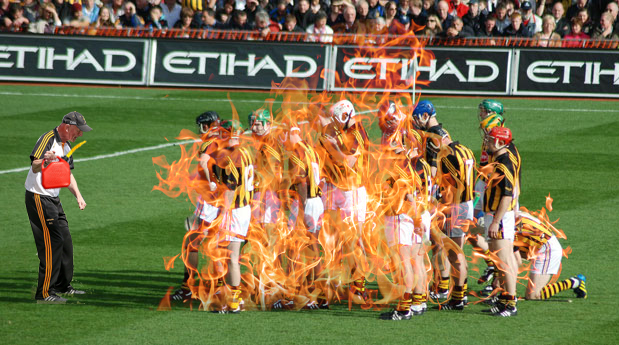 DOUSING his team in what has now been confirmed to be premium Diesel, former hurling manager Brian Cody said his last goodbyes to the Kilkenny team after officially standing down over the weekend after 24 seasons at the helm.

Thousands of fans, former players and friends applauded the 68-year-old as he held up a now half empty can of accelerant, before striking a match and tossing it at the players, igniting them as emotinal screams filled Nolan Park yesterday evening.

“I couldn’t bare to just leave them behind – it’s for the best,” a teary eyed Cody explained, the tears presumably from the fumes as the players slowly perished in the emmense heat behind him, “it was either this or let someone else come in and undo everything I thaught them. It’s hard to say goodbye, but I hope this makes it a little easier on everyone,” he added, before throwing the other half of the fuel onto the now silent players.

“Listen, the man can do what he wants after winning 11 Liam MacCarthy Cup triumphs, 18 Leinster senior hurling titles and 10 National League crowns, and if he wants to burn everything in his wake then so be it,” defended one Kilkenny fan, “what a fucking legend of a man”.

Meanwhile, every other county hurling manager in the country welcomed the news of Cody’s departure, insisting further that he should sign a contract stating that he will never coach another Kilkenny hurling team ever again.