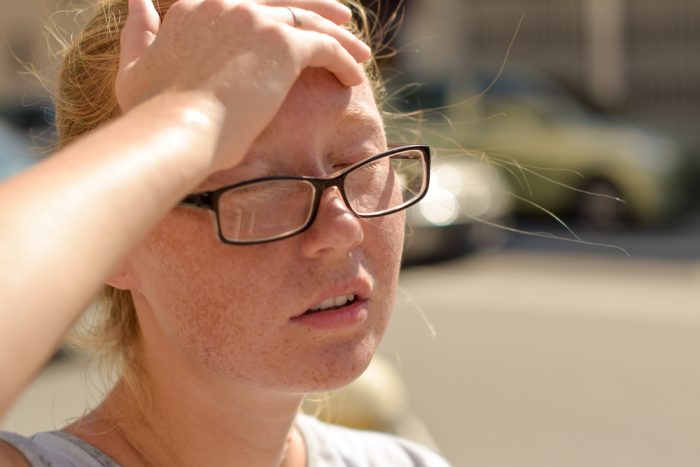 LOCAL woman Grainne Kelly has exclusively revealed to WWN that thanks to the horribly stuffy work space she calls an office combining with the unforgiving heat, her body is currently made up of 67%.

The Dublin office worker was first subjected to becoming a gloopy assemblage of limbs and liquid upon entering the city centre on a busy Luas this morning. Packed tightly against the bodies of 12 strangers who had a similar problem with cascading sweat glands, Grainne admitted she did not know where her body began and her sweat ended.

“I had to pat myself down with tissue and redo my make-up before sitting down at my desk to sweat it all off again, I’m sweating places on body I thought it was illegal to sweat from,” Grainne shared, highlighting the need for more than just one single fan on her office floor between 20 staff.

“One or two of the lads in the office said ‘let’s go to Stephen’s Green for lunch’, yeah I sweated so much ,they don’t need to water the grass there for at least a month,” Grainne confirmed as she dabbed her brow and fanned herself with a series of binders while begging a coworker to knock through a wall with a sledgehammer to let more air in.

With the absence of a decent air conditioning system in many offices, Grainne is believed to be one of thousands currently contending with a constant fight against the sunny elements.

“I’d take off my jacket but with the sweat, my white shirt is translucent at this stage, and I ditched my bra on the Luas as it was driving me mad,” Grainne conceded as she poured a litre of water over her head in an effort to cool herself down for a 23rd time so far today.

Met Éireann has advised anyone wishing to stay sweat free should spend the day lying perfectly still in one of the freezers in their local supermarket’s freezer aisle.