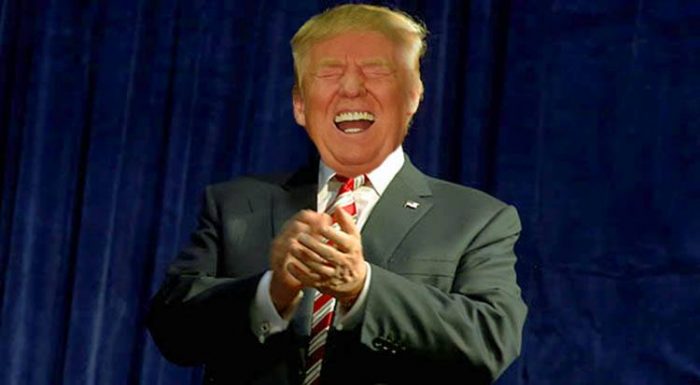 “OOOOH that was a BIG one!” exclaimed a giddy Donald Trump in an adorable clip posted to YouTube showing the 45th President of the United States in his situation room, watching missiles launched from US warships in the eastern Mediterranean rain down on strategic targets in Syria.

“Again, again!” cried Trump, clapping his hands together in such excitement that he barely noticed he had knocked over his carton of juice, which one of his aides cleaned up as Trump reached over the table to press some of the shiny buttons on display.

“I want the next one to go BOOM BANGY BOOM,” yelled the POTUS, kneeling on his swivel chair and making it spin round and round.

“And to hit all them mean people in Syria. Just the mean people, not the nice people… oh, it hit the nice people too? Oh well, that’s too bad. Maybe next time we can HOLY MOLEY did you see that rocket go into the sky? That’s ah-mazing!”.

“Mr. President, we have Putin on the phone. He says you’re to stop this right now,” said a White House aide, as Trump ate way too many sweets.

“But I don’t want to stop! I never get to fire any missiles, why can’t I just fire a few more?” sobbed Trump.

“I’ll check…. Mr Putin? Yes, uh, Donald says he would like to launch a few more missiles before he… ok… uh-huh… and you’ll release…. and then everyone will know that…. okay, okay, I’ll tell him that now. Mr. President? Em, Mr. Putin wants you to stop RIGHT NOW or else,” said the aide.

As the last US missile smashed into its target, Trump stormed off to his room muttering about how he ‘hates everyone’.