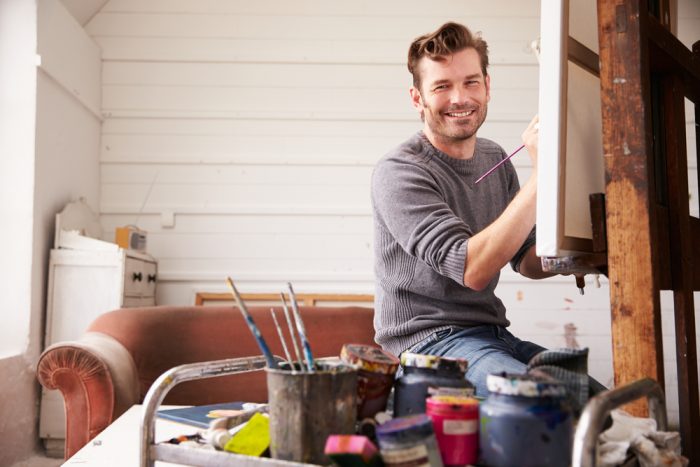 A DUBLIN BASED artist has spied an opportunity to serve himself after noting the warm reception several politically aware artists received for pieces which tackled women’s rights and abortion laws in Ireland.

Noel Kenlon, who goes by the name ‘Ghostie’ when painting made to order pictures of flowers, believes pretending to care passionately about the plight of women who require an abortion might just be the boost his career needs.

“My portraits of Cristiano Ronaldo haven’t sold as well as expected, and I see the attention people get when they address, like, issues and important things like that. If I paint a sad woman and say it’s for repealing the 8th or whatever, who knows what that could do for my profile, my career and my bank balance,” Kenlon shared with WWN.

Kenlon, who admits to not caring about much in his 25 years on the planet, confirmed that he wouldn’t just jump headlong into his new artistic adventure.

“I think I’ve got to give out about abortion laws first, get the ball rolling, that’s what all the genuine artists seem to do, then I can swoop in a week later with a painting that could maybe be turned into a postcard or a badge,” Kenlon confirmed, while spending some imaginary money in his head.

Thought-provoking pieces of art produced by long-standing campaigners for social justice could well form the basis of Kenlon’s work, although he is not ruling out putting very little thought into his contribution to the conversation.

“I could do like Banksy style stuff, you know graffiti a pregnant woman on a wall, but like it’d be smart like, or if I’m a bit pushed for time I’ll just paint ‘down with the government’. Either way, I’ve seen how things like this galvanise people and I’m just at the right point of obscurity that I’m willing to exploit that goodwill for my own profile,” Kenlon concluded.