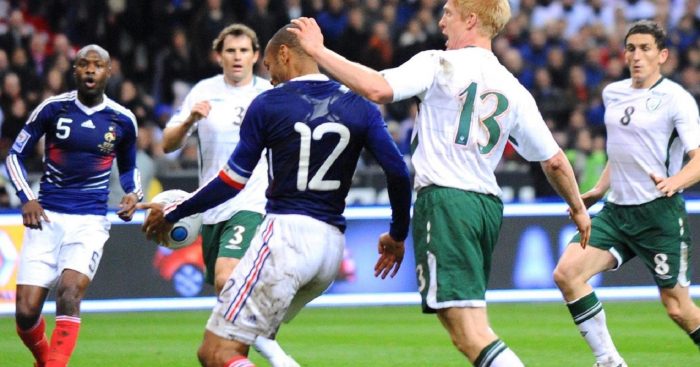 WWN continues to bring you unparalleled coverage of Euro 2016 with its preview of Ireland’s match against those shower of garlic smelling, Renault Clio driving, arty farty film loving bastards.

Little focus has been paid to Thierry Henry’s infamous handball in the build up to the match, as Irish have long since gotten over what that son of a bitch did.

Despite only being allocated 4,000 tickets for the match, as many as 300,000 Irish fans are expected inside the 59,000 seater Stade de Lyon stadium.

France fact: the average French person is currently carrying out 11 extramarital affairs while swearing and smoking a cigarette.

Tactics: Ireland are hoping the replicate the aggressive and intense display shown against the Italians, which in boring football tactic speak means kicking lumps out of the French from the opening minute. Roy Keane has promised Ireland’s display against France will be more violent than last week’s episode of Game of Thrones.

France have admitted they will throw in the towel if Jonathan Walters is declared fit for Ireland, while Martin O’Neill confirmed that plans to clone Robbie Brady 10 times are underway. France manager Didier Deschamps revealed that his entire midfield are under orders to man-mark Wes Hoolahan left foot.

After pressure from Ireland, UEFA have confirmed that for a change the game will be refereed by someone who isn’t a blind bag of shit.

France fact: French cuisine is celebrated all over the world, and yet, it is still not as good as Supermacs at 3am in the morning.

Dangerman: Olivier Giroud. The Arsenal striker is so wayward with his shooting, the Irish embassy in France has issued an alert to all Irish fans heading to the game to warn them that they could risk serious injury if hit by one of Giroud’s failed attempts to hit the target.

France fact: it is thought the French working force are never more than four seconds away from announcing a widespread strike.

Hopes: that all 19 of France’s world class players have a bad day at the office.

Fears: that all 19 of France’s world class players turn up.

France fact: it is impossible not to enjoy the French national anthem.

Speaking on BBC last night, Thierry Henry agreed to have his hand violently sawed off in the event of an Irish win.

France fact: star striker Karem Benzema was not included in France’s squad for the championships due to an ongoing investigation into his part in blackmailing a former teammate for money in exchange for not releasing a sextape in which his teammate featured. James McClean’s tweeting doesn’t seem so bad now, does it?

Depending on what mood they’re in Eamon Dunphy, John Giles and Liam Brady may only emit 4 tonnes of bullshit during their analysis of today’s match.

Prediction: 4 million Irish people will be calling in sick to work tomorrow.