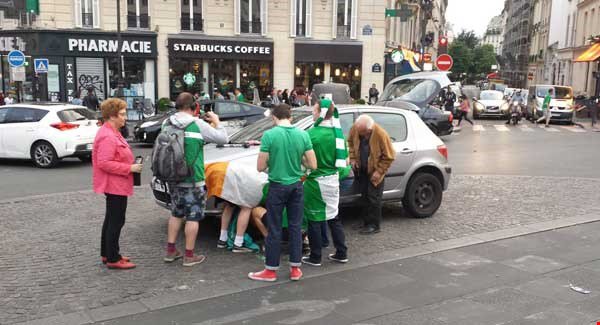 FEARS are growing that Irish fans in France for the Euro 2016 football championship may be about to hit peak soundness, with experts warning that they have no idea what will happen when the Green army run out of ways to endear themselves to the world.

Fans from all over Ireland descended on France last week ahead of the Republic Of Ireland’s campaign, and immediately set about being as sound as they possibly could, through a series of hilarious chants, hilarious slogans on flags, and hilarious acts of charity and goodwill.

Although the world currently loves the Irish, there is a growing dread as to what might happen if the boys in green do something that is so sound, it can’t be topped.

“We’re looking at the complete collapse of the soundness bubble, ” said one soundness analyst, speaking exclusively to WWN.

“And we’re looking at it soon. There’s only so much the Irish fans can do before their soundness becomes irritating. And the day is coming soon. Last week, they changed a flat tyre for an old couple. Today, they helped a lady deliver a baby in the back of a Clio. And there’s word coming in that Irish fans are flooding French hospitals to donate a kidney apiece to whoever needs one… this is unsustainable”.

Should the soundness bubble pop, there are fears that Irish fans may never be able to get the validation that they’re “very good” needed to continue supporting the Irish soccer team.