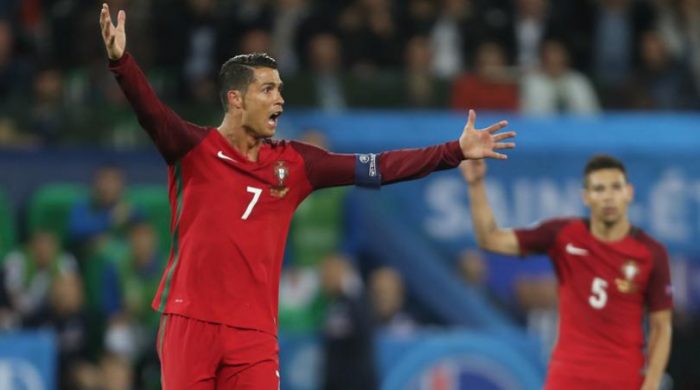 WELCOME once again to WWN’s Euro round up. Today’s edition features a rare example of Ronaldo keeping his shirt on.

The first game of the day saw many people’s dark horses Austria completely shit the bed and lose 2-0 to the lesser fancied Hungary. Goals from Szalai and Steiber gave the Hungarians the win, and disproves the theory that bad things happen to Nations with leader’s who are overtly racist towards refugees.

After going 1-0 down Austria’s Aleksandar Dragovic sensed his team were fighting a losing battle and chose to get sent off rather than stay on the pitch for what was an embarrassing result for a side ranked 10th in the world. After Austria’s performance both FIFA and UEFA admitted world rankings are meaningless, citing the example of the tournament’s strongest side, Ireland, and their insultingly low ranking.

The 8pm kick off saw Iceland snatch an uplifting draw against Portugal, with the world’s most narcissistic man Cristiano Ronaldo frustrated at not being worshipped every second he was on the pitch.

Portugal’s star managed four impressive tantrums, three I’m going homes, two this isn’t fairs, and one conniption fit over the course of the 90 minutes, a new record at an international tournament.

However, the Madrid player almost didn’t make it out onto the pitch after he could hear Iceland fans in the crowd cheering for someone other than himself. After stewards and UEFA officials intervened, Iceland fans agreed to chant for Ronaldo every 10 minutes in order to ensure the game went ahead.

Iceland’s spirited display becomes even more amazing when you realise 43% of the minnow’s entire population were on the pitch last night.

Referee Cüneyt Çakir earned praise for how he marshalled the game, with a highlight being his correct decision to book Nani in the opening minute for his crap haircut. The evening only got worse for Nani after Ronaldo confirmed the ex-United winger would be dropped for the next game for breaking the ‘only Ronaldo is allowed score’ rule.

Viewers watching BBC’s coverage of the tournament have made a heartfelt plea Thierry Henry, begging him never to wear that hideous abomination of a shirt again.

Today’s matches see Russian’s finest hooligans face off against anyone who gets in their way.

And there were worrying scenes for French authorities as a shirtless Vladimir Putin touched down in Lille this morning on a Russian government plane, descending the stairs with a chair in his hands asking ‘where are the Slovakians?’

Hosts France round off the day with their tie against Albania, and thanks to the likelihood of N’Golo Kante and Dimitri Payet starting, the game will be watched by record number of football hipsters.

John Delaney has emerged yet again as one of the game’s most respected leaders after telling UEFA how to stem the tide of hooliganism at the tournament.

Delaney is believed to have said “don’t let them do that, get the police to arrest them”. The FAI chief then went on to describe the time he, along with his partner, were accosted by 45 ninjas in a dark alleyway. Despite being outnumbered Delaney round house kicked every last one of them.