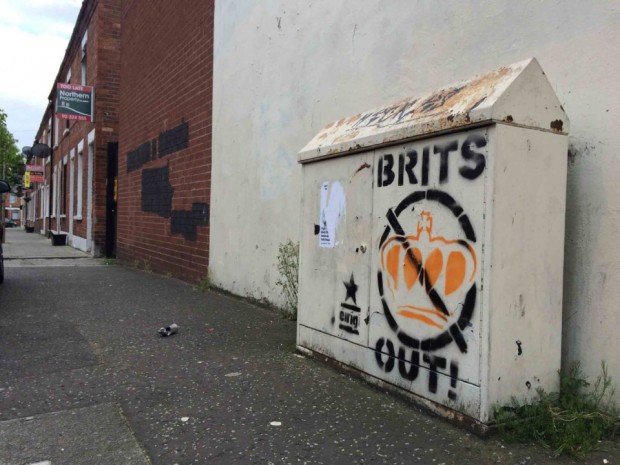 LONDON Mayor Boris Johnson is to seek the help of the graffiti artist whose ‘Brits Out’ works have been so abundant across Northern Ireland, ahead of the upcoming referendum which will determine whether or not Britain stays in the EU.

Prime Minister David Cameron announced the ‘Brexit’ referendum on Friday, stating that he believed the UK would be better off in a reformed European Union.

However, several MPs have come out swinging for the no side, with Boris Johnson leading the charge. Johnson, claiming that the referendum is Britain’s one true hope for real reform away from the EU, set about contacting Sean Maguire, the man responsible for more ‘Brits Out’ slogans than anyone else in history.

Maguire, known as the ‘Nordie Banksy’, has been spray-painting ‘Brits Out’ slogans across Northern Ireland for decades, with his famous slogan adorning the sides of PSNI stations, trains, bridges and bits of wood nailed to telephone poles.

Now Johnson believes that Maguire’s simple yet iconic phrase is exactly what is needed to inspire UK to vote ‘no’ on 23rd June.

“We just need to do a few tweaks to it,” said Johnson, on his way to Northern Ireland to meet Maguire.

“It’ll still say ‘Brits Out’, but we might add ‘of Europe’ at the end of it. And maybe we’ll have it on the backdrop of an EU flag, rather than a crude drawing of a man in a balaclava holding a rifle over his head”.

Johnson added that he has politely declined Maguire’s offer to throw in a few ‘sniper at work’ slogans as well.