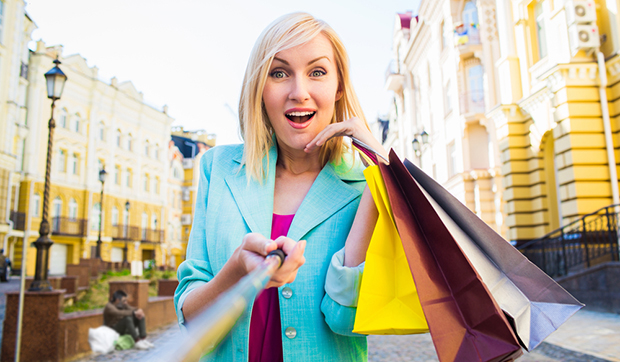 DUBLIN girl Emer Reilly’s Christmas shopping blitz ended in tragedy as the perfect post-shopping selfie was ruined upon the discovery of an unsightly homeless man in the background of the photo.

Reilly, 23, had carefully staged a selfie opportunity outside Brown Thomas on Grafton St, with the photo taken from a height angling down on her face in near perfect light, while also clearly capturing the presence of Brown Thomas, Forever 21 and Urban Oufitter shopping bags, as well as a juice.

“Do any of you guys know photoshopping,” Emer queried in a Whatsapp group containing her 39 closest friends, barely able to hide her anger at the homeless person’s attempt to sabotage her Snapchat and Instagram popularity.

Siobhan, one of Emer’s 9 best friends suggested carefully cropping out the section of the selfie in which the homeless person resided, bagging at the top of Wicklow Street.

“Don’t be so fucking thick Siobhan, if I crop him I lose the Brown Thomas bag too,” Emer barked, highlighting the Christmas shopping she had carried out for herself yesterday, which included a €4 euro snowglobe for her mother and father, and €340 on Benefit make-up for herself.

“It was so Christmassy, and I looked a-mazing, won’t get a selfie like that for at least another two weeks,” Emer lamented.

Several concerned friends asked Emer if she had taken any other selfies in which she looked as good, but devastatingly for the DIT student, all other selfies encountered similar problems.

“Eh, I’d obviously have said so if that was the case, had one with the Christmas lights, but there was another homeless guy in that one, same with one of me and the buskers. They’re absolutely everywhere, shouldn’t there be like an exclusion zone for them? Should have taken a selfie when I was inside,” Emer concluded.