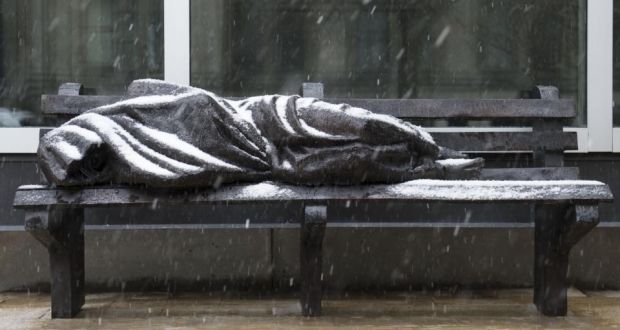 HOMELESSNESS has been brought to an end following the anonymous gifting of a statue of a homeless statue.

Jesus, the only son of God, was famously not homeless, but it is thought the presence of this statue nearby Dublin’s Christchurch has single-handedly brought about the end of homelessness.

“Ah now, I have to say, fair fucks to whoever spent money on that and donated it,” offered former homeless man Donagh Jeffries.

“And to think all this time people were donating actual money to homeless shelters to keep them open because the Government funding is so lacking, and all the idiots needed to do was slap a bit of sleeping Jesus on a bench,” Jeffries added.

While there is a shroud of intrigue around the donation itself, Dublin is not the only city to receive one as there are 10 others like in existence around the world.

“It is truly a pure use of public space, Jesus was a selfless man and here he is hogging the entire bench by laying across it, no not a fan at all,” Reverend Martin Kelly of Christchurch explained to WWN.

“No, the donation was nothing to do with us, but may I say, we can assure you that were he to be homeless Jesus would have been one of those delightful homeless people who can play the flute and not the ones that burst into the toilets in McDonalds to shoot up,” Fr. Henry Curt from the Catholic Church told WWN.

It is still unclear as to how the placing of a statue of Jesus somewhere ended homelessness it has and the Government have gone on record to praise the statue.

“Thank fuck for that, we hadn’t a hope of helping out those lads,” Minister for the Environment Alan Kelly said in a statement on the steps of Leinster House, “no more avoiding looking at them on my way to work”.