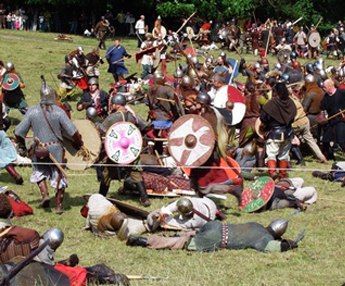 NEARLY two hundred and eighty people were raped and another one hundred and forty four were murdered during a reenactment rehearsal of the Viking invasion of Waterford City yesterday morning.

As an eerie calm descended on the scorched streets today, distraught survivors recounted a fresh catalogue of horrors committed by local volunteers who just seem to have gotten ‘carried away’ with their roles.

Crowds of violated Waterford men and women who survived the four-hour ordeal related a tale of terror at the hands of the would-be Vikings, who were rehearsing the reenactment of the 9th century Viking invasion of Waterford city.

The volunteer group, made up of amateur actors and viking enthusiasts, occupied the People’s Park at 10am yesterday morning and embarked on a four-hour spree in the city and the surrounding area, Gardaí said.

“Nearly all reported attacks were described as having been perpetrated by two to six Viking clad men and women, often taking place in broad daylight,” a Garda spokesman said in a statement today.

Mark Wallace, a local historian, said rape and murder was common in Viking days, but that this attack was unusual because the people involved in yesterday’s reenactment were not actually Vikings at all.

“I haven’t heard of anything like this happening since the Viking era,” he said. “In one respect, the reenactment went very well indeed, but in the other, the unfortunate rape and murder of all those innocent people was probably unnecessary.”

Ardkeen hospital has set up several temporary marquees to treat people for psychological and physical trauma.

Local aid agencies say it is impossible to give accurate figures on how many people have been assaulted, maimed and/or killed.