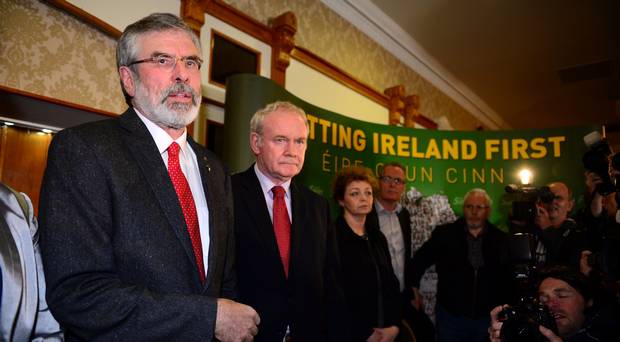 A POLL carried out by Ipsos MRBI on behalf of The Irish Times today reveals that Sinn Féin are neck-in-neck with Fine Gael, much to the surprise of Sinn Féin themselves.

“Really? Hang on let me double check,” said Gerry Adams in a party meeting this morning in the corridors of Leinster House, “no, there must have been some mistake”.

Sinn Féin’s recent opposition to 99.43% of everything bad in Ireland, including the rain and the alarm going off in the mornings seems to have paid off with the general public but the party was reluctant to start celebrating the news.

“Shit Gerry, you know what this means. We might have to actually be put in charge of stuff, and make real decisions,” said Sinn Féin deputy Mary Lou McDonald, unaware she was within earshot of this WWN reporter.

A Sinn Féin staff member then cheerily quipped “if this keeps up we’ll be in power come the next elections,” his remarks doing much to further depress the attending TDs.

“But I love being in opposition,” said a teary Pearse Doherty, who was on the verge of pulling a childish fit, “I get to give out and everyone claps, I feel great, but if we get into power we’ll have to make tough decisions. I don’t want to go Gerry, you can’t make me Gerry,” the emotional TD added before locking himself in the utility closet.

The Sinn Féin leader Gerry Adams spoke directly to WWN about what one would assume was great news.

“Yeah, we’re very happy with the public’s response,” Adams said, looking quite sad, “but do they know about all the IRA stuff? And I mean our policies are a bit scattered? Are they sure?” he added before this reporter confirmed the public’s enthusiasm was genuine.

“But if I’m Taoiseach, I’ll be too busy to tuck Ted into bed, whose going to tuck him in?” Adams added, looking worried and rather lost.