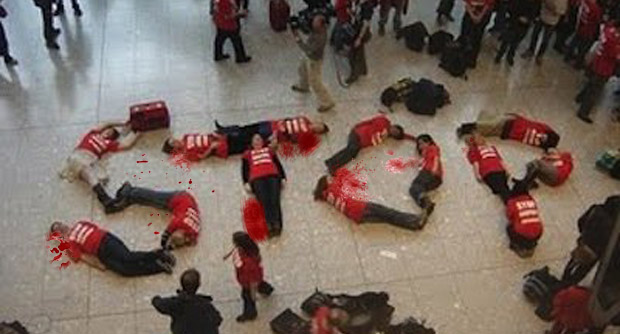 TODAY WAS to be their time to shine, but unfortunately for 14 flash mob dancers, today was to be their last on this planet after a brutal beating was given out by over one hundred members of the public in Waterford city.

Gardai were called to a city centre shopping centre at around 10am this morning after it was reported that a mass brawl had broken out following a surprise flash mob attempt. They arrived to find several lifeless bodies scattered around the floor of the building.

“The place was wrecked and there was bodies everywhere and some where placed in position to make the word ‘STOP’.” said one Garda, who was visibly upset with what he saw. “There were people covered in blood and crying. It was utter chaos.”

It is believed the flash mob dancers, who were employed by a national mobile operator, began their routine gently, with the song ‘Praise You’ by Fatboy Slim.

“Everyone was confused at first and started looking around for the music.” stated one eyewitness. “But things escalated quickly when they began their dancing routine.”

Sources say annoyed shoppers began booing the dancers, with many pushing them out of their way.

“They took up the whole entrance to the mall.” recalled shop assistant Geraldine Kelly. “One of the dancers accidentally smacked an old woman with his elbow and things just got nasty after that.”

CCTV footage from the scene confirmed the claim and showed several members of the public uplifting a bench and throwing it at the group of dancers. Another man can also be seen running into the flash mob with a Hurley, scalping three of the dancers.

“One dancer was thrown through a chemist’s window. I seen another being held down and beaten with a metal bin.” said one man, who was being treated for shock. “People just went crazy. I found myself kicking one of the dancers. I was just going with the crowd.”

An estimated 36 people were arrested and another 115 questioned at the scene today by detectives.

Shopping centre manager Gerald Keane told WWN that this was the fourth flash mob routine in the last month.

“I suppose the people just got sick of them in the end.” he explained. “We will not be allowing any more of these staged events in the centre.”

“I suppose you could say it was ‘flash mob mentality’ that killed the flash mob.” he concluded.