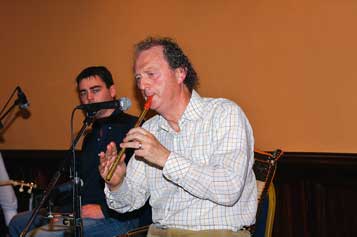 TRADITIONAL MUSIC enthusiast Michael Walsh finished his set to an ecstatic applause from the punters of the Hogs Head bar in Tralee. He wiped down his moist whistle and took a well deserved bow; his polished smile hiding his ever racing mind.

“This could be my last ever performance.” he told me backstage, sipping a nice warm flask of green tea with honey.

The 58-year-old said he started playing for his band ‘Some say the divil is dead’ over thirty years ago and never had a problem ‘Whistle Blowing’.

“Times were different back then. You could blow your whistle and not have to worry about the consequences.”

Recently I phoned Michael looking to interview him about the current Whistleblower crisis in the Irish news. He was unaware at the time so I filled him in on what was going on – telling him the government is cracking down on his kind.

“I’m still not sure why the government is picking on us.” he said stupidly. “I don’t understand. What is wrong with blowing whistles? What about referees, will they face the same fate?”

I didn’t have an answer to his ridiculous questions, but feeling his pain I comforted him with a game of hide and seek, running away and covering myself with a stage curtain.

“What the hell are you doing?” he exclaimed, obviously not knowing the rules.

“You have to find me” I shouted, sniggering beneath.

“But I can see you. You’re behind the curtain.”

Furious at his lack of go, I threw back the curtain and told him the words he finally needed to hear: “You see Michael, thats whats wrong with you whistleblowers; always ruining the fucking game from everyone else.

“Maybe Shatter was right” I concluded.

With that I turned and walked away, making a ‘Yes I showed him’ fist to myself. I didn’t look back, but knew deep in my minds eye that the look on Michael Walsh’s face was probably priceless at that moment in time.