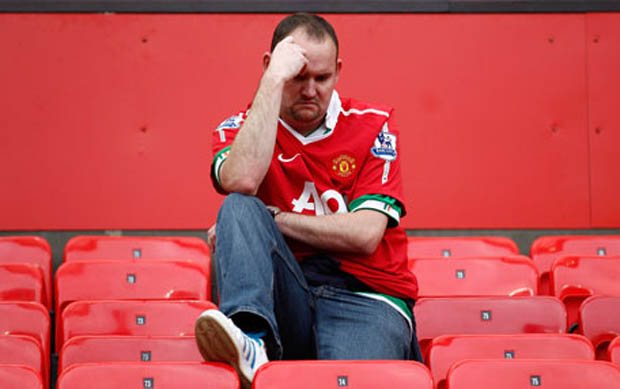 Following another disappointing result for current Premiership Champions Manchester United, one fan is on the brink of transferring his soccer allegiance to a more successful team.

“I’m weighing up my options at the moment” said 28 year old accountant Ian Horris. “I’ve been a Red Devil fan since I was in school, when they won the Premier League the first time. I remember it well; all the kids at school had their favourite teams, so I had to show an interest in order to fit in. I’ve been a vocal supporter ever since, apart from a few years when they didn’t win anything”.

It’s believed that United’s atrocious run of form under new manager David Moyes, which has resulted in the Red Devils languishing in 7th place with little relief in sight, may be the tipping point for Ian.

“It’s just getting harder and harder to justify sticking with a team that has no chance of winning the title this year” said Ian, who owns two Man. United jerseys. “When I show up at work on Monday and force myself into conversation with the rest of the lads, what am I supposed to talk about? How my side was held to a draw by a team I’d never heard of? How we’ve been knocked out of the FA cup?”

“No, if I’m going to be spending my Monday mornings glancing at the back page of the tabloids to get my team’s weekend results, then I’m going to do it for a team that are going to give me results. Manchester United used to give me the opportunity to personally feel like a winner. The titles! The victories! The last-minute goals! Even though I didn’t watch any of the games, I could boast about supporting the winning team”.

Weighing up his options, Ian has decided that a move to Arsenal could be the solution to his woes:

“Yeah, I’m really liking Arsenal this year” said Ian, who is also a fan of Barcelona FC and the Los Angeles Lakers.

“I was thinking about Manchester City, who I nearly switched to a couple of years ago when they won the Premier League. That sure was exciting! But Arsenel are looking strongest this year, plus they play in red which I much prefer over blue. I can probably still wear one of my two Manchester United jerseys if I ever watch a game in public”.