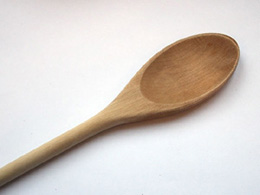 A FATHER who threatened his three-year-old son with the wooden spoon because he was being bold was given a 12 month prison sentence today.

The 37-year-old man, who cannot be named for legal reasons, pleaded guilty to threatening the boy in the family home where he lived along with his wife, the mother of the child.

The boy had tears on his face and was very distressed, but did not require medical treatment the court was told.

Gardai were called to the house in Newtown on Jan 3rd this year where the father immediately admitted he had threatened the child with a wooden spoon.

The man was arrested and later made a statement that he had tried to scare the child because he had refused to ‘be a good boy’ and wouldn’t ‘eat his dinner’.

The mans wife told the court that while the boy was traumatised after witnessing the violent gesture, there was no lasting physical or psychological damage.

“He was so scared that his dad was going to hit him with the wooden spoon that he cried out for his mommy.” she said. “I didn’t know what to do or where to turn. I had no option but to call the Gardai.”

The mans solicitor stated that he suffered from temporary insanity at the time and that he had also overcome a cigarette addiction several years ago. Apart from the threat to use the wooden spoon, he had also put the child in the corner on more than one occasion. He was also fined for no road tax back in 2002.

Judge Mary Burges said she was happy to note the child did not suffer any long-term mental damage but a threat of violence at any level cannot be tolerated by the courts.

The judge branded the man as a ‘sick and evil monster’ and that the 12 month sentence was a lenient one. She ordered that he must attend medical, psychiatric and counselling assessments before his release early next year.