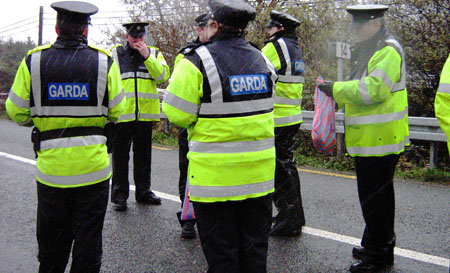 GARDAI are said to be ‘pretending’ to investigate an attempt on career criminal John Gilligan’s life today in Dublin.

A hand-full of detectives are expected to go through the motions after an incident with a man with a gun took place in a pub on the Navan Road at around 4 o’clock yesterday afternoon.

“The official line is that we are ‘very concerned’ for the well being of Mr. Gilligan,” said one detective, who was eating a ham cheese and coleslaw roll at the time. “We’ll probably write down a few details in a book somewhere, but that will be about it.”

“I’m sure there’ll be a few hours over-time in it for us.” he added.

Gardai stated an armed man entered the pub and was asking for the convicted drug dealer.

They have asked any witnesses not to come forward and urged them to erase any details of the incident from their memory.

“There’s no point in fussing really.” said another inspector. “Best not get involved. If you did see anything, just keep it to yourself.

“They’ll get him again next time – be grand!”

The gunman made his getaway on a motorbike in the direction of the Ratoath Road in Finglas.