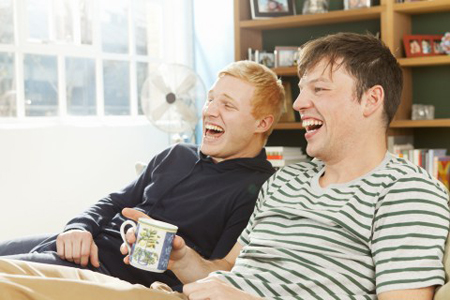 Gary Rodger’s sitting room was the scene of some not-so-gentle slagging last night as he and his friends watched the Borussia Dortmund v Arsenal game last night.

The 29-year-old Limerick man had invited friends over to watch the football and enjoy a few midweek beers, but the evening was thrown off course when one friend, Liam, emerged from a trip to the bathroom. Liam, an expert in a practice known as ‘banter’, brandished Gary’s face moisturiser bringing it to everyone’s attention.

What followed was 20 solid minutes of Gary being chastised for ‘caring about his skin’. A volley of good-natured abuse was hurled in his direction by his friends who hilariously questioned his sexuality while pointing out that white moisteriser cream could be mistaken for a certain bodily fluid. Gary’s friends heartily laughed at his expense until eventually the laughter died down.

Liam, who also uses moisteriser everyday as he has quite sensitive skin, tried to mask a genuine question with a mocking tone. “So does your gay little moisturiser relieve a lot of the irritation you get from shaving? Ha ha ya gaybo!” At this point Steo, also a moisturiser user, chimed in with another genuine question. “Ya dirty bellend Gary, does it represent value for money? Have you used the nivea one? What’s it like? I bet you have ya great big homo!”

Gary refused to rise to the mocking instead choosing to throw away the mosituriser acknowledging he was no longer a man’s man. Liam and Steo locked on eyes on the discarded moisturiser without trying to give the game away.