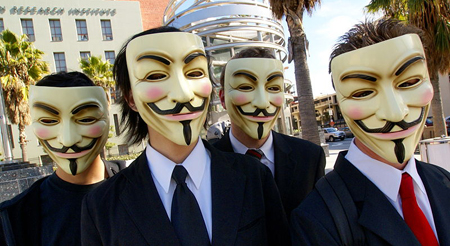 Just moments ago the gates of Leinster House were besieged by as many as 179 people affiliated with the shadowy Anonymous movement.

The event, which is set to take place in cities across the world today, could see a like minded legion of people marching for ‘a more just, fair and free society’.

Organisers of the Dublin edition of the march expressed surprised at the low turn out of their march. ” I wasn’t expecting this,” said Frank Walshe speaking to WWN on the condition of anonymity, “like you go to the trouble of setting up a Facebook group and calling it the ‘million mask march’ and then less than a million people turn up, yeah it’s embarrassing”.

“Look that lad’s not even wearing a mask,” added Sarah Gregory, also speaking to WWN on condition of anonymity, “we hoped to appeal the section of the Irish people who are sick to death of the crooks and liars in power, a fair few people said yes on Facebook that aren’t here and that’s just dishonest isn’t it?”

Despite a turnout of slightly lower than 1 million people the current Government will certainly have been given something resembling a shock. ” I’m fairly angry,” shared a government insider, “it was quite difficult getting out of Leinster House I had to ask one or two people to clear a path which they did but, you know, it took about 10 seconds, fairly inconvenienced me.”

To passers-by, it made for a strange and intimidating site with as many as four Gardaí standing idly by scrolling through their phones as several people were seen shouting catchy slogans at a sturdy building made of bricks and mortar.