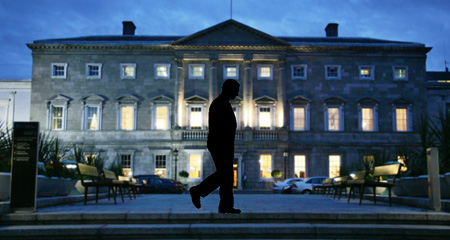 With great power comes great responsibility or so the famous saying goes. With the greatest power in the Western world comes a vast array of spying capabilities – this is not a famous saying as I’ve just said it now for the first time but feel free to repeat it, giving me appropriate credit. Despite the Dáil been adjourned until the 5th of November An Taoiseach assembled key ministers such was his outrage at the news that the US had been spying on prominent European leaders.

I rushed to An Taoiseach’s office in Government buildings only to be greeted by the sight of our leader crouched beneath his desk, phone off the hook and all windows covered over. He was refusing to use electricity instead opting for candles. “Can you hear that?” he asked sheepishly as he peered out from beneath his desk tea cup in hand. It turns out every other minister was preoccupied with their ministerial duties and in the Taoiseach’s words I was ‘the only one I’ve given nothing to do’. Yet again An Taoiseach was turning to me in his hour of need. I sensed that this time the stakes were a bit higher than simply keying senators’ cars after the Seanad campaign went to pot.

An Taoiseach relayed his plan to me as I sat down beside him on the office floor: I was to infiltrate the Web Summit in RDS. With traditional lines of communications such as phone and email compromised I would have to go meet technology experts face to face to see what it was Ireland could do to bring an end to Obama and his spying regime. After spending close to 10 minutes reassuring An Taoiseach that the CIA could not have planted a bug in his bottom while he slept (I would of course have to confirm this with someone at the web summit) I was off to take on the might of the United States of America.

Although I’ve never read any spy novels I have watched, off the top of my head, maybe seven Bond movies so I knew the score. I had Dearbhla organise some of the lick arses in Young Fine Gael, they would create a distraction at the American embassy as I used my political acumen to drag spying safety tips from the mouths of the world’s leading web experts.

Earlier this morning I tackled a sea of i-Pads, self-satisfied grins and poorly executed beards. I dressed incognito (that’s basic ‘introduction to spying’ stuff) but was still amazed no one recognised a minister with my public profile. In my new disguise An Taoiseach would finally see my true worth, right at the beating heart of Ireland’s tech industry. I hung on the shoulder of conversations about highly complex web topics such as Twitter’s new photo policy, dongles and pinning interests. While in the queue to the toilet one man shared a great many web secrets with me which would prove invaluable to Ireland’s cause against American spying. I knew time was of the essence and had I stayed any longer I would have surely been recognised. I made my way back to An Taoiseach with unfollowing Barack Obama on twitter just one of my many tech recommendations.

Upon my return to Leinster House I came to the conclusion that perhaps I should not have fallen asleep during Skyfall. A shadowy figure stood in the corner of the Taoiseach’s office, with the curtains drawn he was hard to make out. I could only make out a Vladimir Lenin like beard…was it the Russians all along? Had they fooled us and the US with a page right out of ‘espionage for intermediates’? Was he holding a gun or stroking a cat? Either way it was lose lose for me as I’m allergic to cats.

The lights were flicked on to reveal the true enemy of the western world…I was so caught up in An Taoiseach’s pleas for help that I failed to see the obvious. “That’s right,” began Ming Flanagan, “I spiked Enda’s tea with my own herbal blend. I figured he should at least sample the product before deciding which way the government should vote on my bill”. That dastardly independent, so-in-so had sent An Taoiseach on a trip, forcing him down the rabbit hole of paranoia. It was all too clear now, why on earth would the Americans tap our phones? We’re many things, but leading European nation, we are not. I ordered Dearbhla into the office to look after Enda vowing to deal with Ming Flanagan later. My next move was to try to explain to the American ambassador why some Young Fine Gael members were outside his embassy burning American flags along with effigies of Barack Obama and Miley Cyrus.