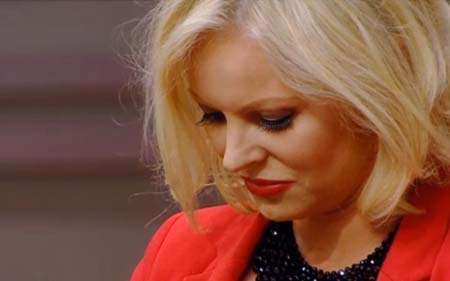 THE NATION had a little skip in its step this morning after it was revealed that novelist Amanda Brunker did not win the celebrity apprentice last night.

Hundreds of thousands of viewers tuned in for the TV3 final last night, which seen B*Witched band member Edele Lynch win €25,000 prize for her chosen charity.

The station was flooded with requests from viewers to loop Amanda Brunker’s reaction to the defeat.

“People were delighted to see her lose,” said TV3 boss Jeff Ford. “Many were looking for the clip of her scowling in the boardroom to be replayed over and over again.”

Ms. Brunker, best know for her ego, tried really hard to look happy for her fellow contestant, in what has been called by many viewers as the most satisfying piece of television in the past twenty years.

“We’ve been looping her disgusted face for hours now.” said one viewer. “She was absolutely sickened she lost.”

“I think this was the highlight of my year.” he added.

Sources close to the columnist told WWN that they too are also delighted she didn’t win the competition.

“She would have milked that win for months.” said one friend and trusted colleague. “At least now we won’t have to listen to her gloat.”

Edele Lynch raised €45,000 for her charity, the Laura Lynn House, over the course of the six week competition.