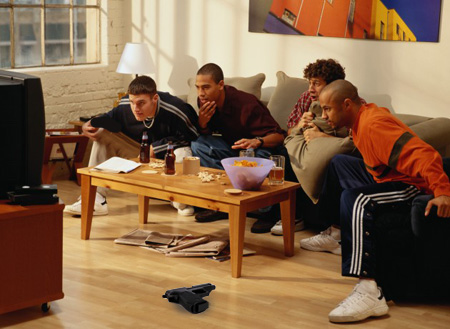 WHILE the majority of the TV-watching nation reacquainted themselves with Nidge and co. the Gardaí of the country had a surprisingly quiet night.

Garda figures for Sunday evening show there was not a single crime committed between 9.30pm and 10.30pm, the precise time crime drama Love/Hate was broadcasting on RTÉ 1.

A spokesman for the Gardaí spoke exclusively to WWN about yesterday evening’s lack of crime.

“The gangs are mad for a bit of Love/Hate and this is obviously great for the law abiding citizens of the Nation”, said Garda Gareth O’Brien.

The good news while welcomed by the Gardaí came with a warning: “to have as many as 60 whole minutes without any crime activity is fantastic but these ‘bad boys’ aren’t watching Love/Hate for shits and giggles ya know, they’re taking notes and the like.

“Nidge is serving as a sort of lecturer in a crash course on crime!”

WWN was able to beat its news rivals to the punch once more when it spoke to a leading figure in the crime underworld who goes by the name ‘Red Squirrel’.

“Ah it’s only fucking class, I have the lads heading up to the DSPCA today to grab a few kittens to try out that gun trick they were doing,” Red Squirrel told WWN. “Yeah course I identify with Nidge, tis tough at the top ya know? Stressful and that but having said that crack a fucking smile Nidgey boy!”

The lull in criminal activity afforded Gardaí the peace and quiet to watch the hit show themselves but incidents of crime are expected to carry on as normal today.