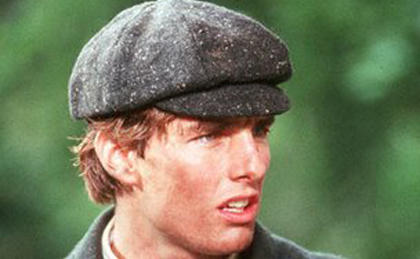 AMERICAN ACTOR Tom Cruise has finally received an Irish heritage certificate in Dublin today to commend his ‘outstanding performance’ in the 1992 box office smash ‘Far and Away’.

Tainiste Eamon Gilmore presented the Hollywood star  at Iveagh House with a framed certificate of his Irishness, and asked the 50-year-old if he would say something in the Irish accent for the crowd.

“Sure I will to be sure.” said Mr.Cruise. “Begorra tis a cold one a diddly iddle diddly dee.”

Research commissioned by the church of Scientology on behalf of The Gathering have established that Mr. Cruise’s family first arrived to Ireland on a space ship in 3,000 bc.

It is believed the Cruise family of super-beings then set up home on the hill of Tara and ruled as leaders of prehistoric Ireland for millennia.

“Tom is related to all the old Irish legends like Fionn Mac Cool and Brian Buru.” said Scientology spokesperson Todd Masterson. “If fact, the Cruise family genetically modified the Irish natives upon arrival from Delta quadrant C-567 in the Constellation of Orion.”

“That’s why there are so many creative Irish people and that’s why Tom was so natural in his role as Joeseph Donnelly in the film Far and Away.”

Cruise, who doesn’t age due to his alien genetics, paused for camera shots for the waiting media on the steps of Iveagh House before levitating three feet off the ground in a show of awesomeness.

“I’m just glad I have been finally commended for my role in Far and Away.” he said while gently gliding back down to earth.

“Who knows, we might just come back and make a sequel.” he threatened.