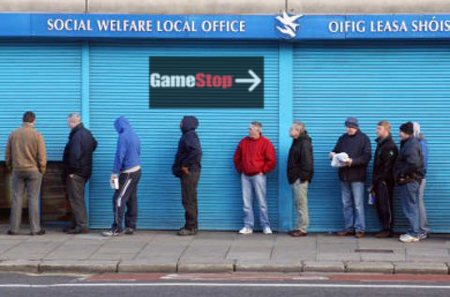 THE SOCIAL Welfare department announced that it will move today’s signing-on time to next week as it clashed with the release of video game, Call of Duty: Special Ops II.

Thousands of unemployed men and women were expected to swap the dole queue for the GameStop queue to buy the first few copies of the game.

It is believed the possible administrative back-log caused by the Call of Duty release would have cost the tax payer over €40m in staff over-time if nothing was done to cater for the games release.

“We estimated at least eighty thousand would forfeit their signing-on times in the South East offices alone.” she said. “Hopefully most unemployed gamers will have a good lash at it now before next weeks reschedule.”

Hundreds of dedicated fans of the multi-platform computer game flocked outside GameStop this morning in Waterford to get their hands on the first batch of copies, which are priced exactly the same as the copies people can still buy later on in the day.

One odourful man told WWN he had been camping outside the store since Sunday: “Had a few beers Sunday night. Said I might as well have a kebab and plop meself down here until they release it.”

“Got a pit of pollen at home so gonna do up a few dobbies first, close the curtains and then order in a pizza or two. You won’t see me out now till next Tuesday’s signing day.”

The last published “Call of Duty” game, “Modern Warfare 3”, hit a billion dollars in revenue 16 days after its launch last year — this is the equivalent of Ireland’s social welfare outgoings for one day.