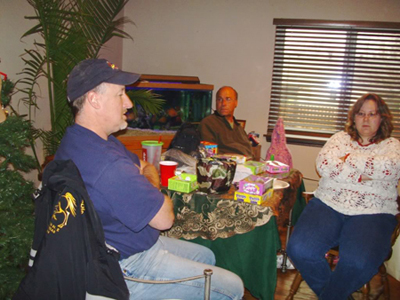 A CERTIFIED TEFL teacher who visited four countries in south east Asia, over a twelve month period, was lapping up the attention at a friends house party late last night.

Michael Dunphy (44) was said to be in ‘flying form’ at the kitchen table following a question from a former work colleague about where he had been the last year.

The Dunmore man, who completed an on-line TEFL teaching course in 2009, claimed this morning that he was ‘the life and soul’ of the party and that he has already made arrangements with some new friends to meet up for a coffee during the week to expand on last nights rivetting conversation about all the places he visited on his ‘zanny year abroad’.

He explained: “You should have seen their faces when I told them about the mad ping pong bar I went to in Thailand!

“They were not expecting that one! No siree.

“They couldn’t believe I beat a six times Thai champion at his own game on his own home table in his own bar!

“Only for I showed them the 224 photographs of me and Zing Hang playing together at the table tennis table they would have said I was BS’ing.”

“Their jaws just dropped when they heard how long we were playing for. I think the pictures of the worn paddles were the icing on the cake!”

Dunphy also claimed that some house party guests were even writing down what he was saying into their phones.

“I must have just blown them away with the ‘guy playing with the Python snake on the street’ story.”

“Two of the lads were frantically trying to keep up with what I was saying by writing every word into their phones as a text message – probably to show people who were not there what I was saying.”

“I suppose not a lot happens in Ireland like that. I’m sure its bizarre to them as they have never been somewhere exotic like Asia before.”

“It felt good to share all my experiences with the lay-men and women of the party.”

The English teacher also said he will probably write a book someday on his wacky year away but will hold off until he tours south America in 2012.

“I have already applied for my visa.

“I can’t wait to go, and then come back so I can tell everyone all about it.” added Dunphy.

The bachelor stated he will probably stay at his parents house for the next seven months until his gets his travel Visa.

He then concluded: “I have lined up some part-time work as a customer service representitive in Rigney Dolphin for a few months and then I’m off again to enlighten the developing world.

“Its funny: I go to teach English abroad and then come back to teach culture at home!