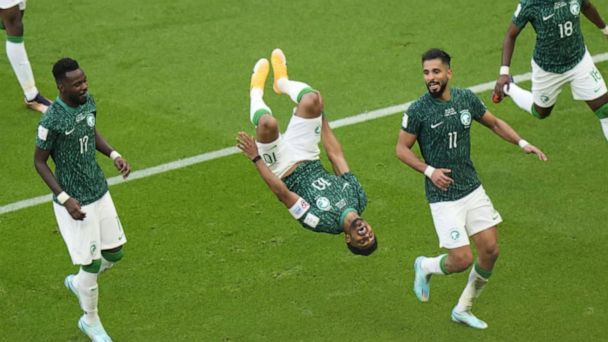 YESTERDAY’S action saw one of the tournament’s biggest ever shocks – FIFA actually condemning homophobia; no not Qatar silly, the organisation tied itself in yet more hypocritical knots by fining Ecuador for homophobic chants.

Elsewhere, Saudi Arabia beat Argentina 2-1. An even bigger shock than Saudi Arabia’s victory was the discovery that the team is being managed by Jamie Lannister.

FACT CHECK: Lads in WhatsApp groups saying they always fancied Saudi Arabia to get a result are talking out of their hoop.

Argentina took the lead in the 7th minute when a Saudi defender pulled on Parades’ shirt prompting the referee to give a penalty decision softer than butter left out in the sun. Messi duly converted the penalty and must have thought ‘this’ll be a nice relaxing day’.

In the first half Saudi Arabia scraped by, playing a defensive line higher than high-waisted jeans on a giraffe, leading to Argentina scoring three disallowed goals as they were caught offside more times than Ryan Giggs.

The beginning of the second half saw Saudi Arabia score against the run of play through Saleh al Shehri. Panic soon flowed freely into Argentine veins like Qatari money into the bank accounts of FIFA officials.

Saudi Arabia took the lead through a sensational goal-of-the-tournament-so-far by Salem al-Dawsari came after Argentina’s defence wobbled like jelly on a trampoline.

After going 2-1 up, the Saudi Arabians defended like their lives depended on it due to the fact that was most likely the case.

An unfortunate clearance late in the game saw Saudi keeper and man of the match Mohammed al Owais fire a forceful knee directly into the head of a teammate, however the referee declined to book him for the challenge due to the fact beheading is legal in Saudi Arabia.

The Saudi Arabian government has given the country the day off as a result of the victory. This is not thought to apply to the lads who hack journalists to death.

The constant high pitched female screaming heard in the stadium towards the end of the game was revealed to be Gianni Infantino logging in to look at his bank balance after agreeing to award Mohammed Bin Salman the 2030 World Cup.

404 Denmark vs Tunisia not found.

Similar to the Denmark Tunisia clash Poland and Mexico played out a dreary game in the knowledge that it would be impossible to top Saudi Arabia’s result. A scrappy, often ill-tempered game saw more stray elbows than you’d see in a chipper after Coppers closes.

The standout moment saw Robert Lewandowski awarded a penalty by the referee just so pundits had something to argue over.

Despite Mexico’s three goalkeepers having a combined age of 122 (or ‘one Cristiano Ronaldo) Guillermo Ochoa, appearing in his 18th World Cup, saved Lewandowski’s penalty which was admittedly weaker than a pint of Island’s Edge.

Mexicans celebrated the save in wild scenes not witnessed since Leitrim locals greeted their first set of traffic lights in 2013.

The vast numbers of vibrant and happy Mexico fans jumping for joy was enough to give US Republicans a panic attack.

One camera man was arrested for falling foul of the morality police for one too many shots of attractive Polish and Mexican women in the crowd.

In the final game of the day as everyone predicted Australia’s Craig Goodwin scored the first goal of the game. This only served to piss the French players off.

Oliver Giroud became France’s joint scorer as he bagged two goals in the 4-1 victory. The French FA have marked the occasion by flying in 51 mistresses for Giroud, a mistress for every goal.

Elsewhere, a BBC report revealed that Qatar’s claims it was staging a ‘carbon neutral’ World Cup were false as it is estimated to be the biggest carbon event outside of a war, meaning it was on course to produce more hot air than Gary Neville.

RTÉ have confirmed they will launch an investigation after a viewer claimed they watched a match in full on the RTÉ Player without the connection cutting out once.