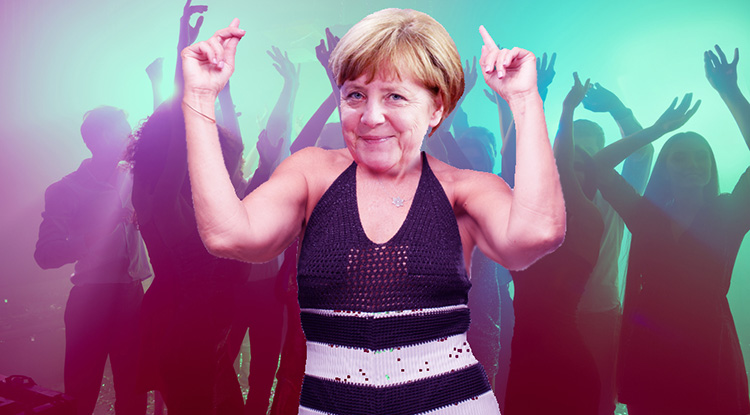 WITH HER 16-year reign as leader of Germany coming to an end, Chancellor Angela Merkel has confirmed her intention to see out her days clubbing in Ibiza.

“It’s time to let my hair down,” said glow paint covered Merkel, applying pasties to preserve her modesty as she donned a figure hugging onesie on her way into Pacha, her eyes already like saucers.

“Do you know how much stress builds up over 16 years having to be the stoic and stern one? The one in charge, keeping everyone in check? My days of being the responsible and reliable one are finally over” added the former CDU leader, who intends to DJ in Ibiza under the name Merk the Berserk.

The 67-year-old enjoys a somewhat contested political legacy praised for many modernising policies and criticised for not being visionary enough, however her most controversial statement remains the one about the Berlin club scene being overrated and up-itself, hence the move to Ibiza.

While Merkel is beginning her retirement in Ibiza during the off-peak season, those with knowledge of the Balearic Island confirm that like rats in New York you’re never more than 6 metres away from pills and pulsating music all year round.

“My PHD in quantum chemistry should come in handy when I’m choosing what moon biscuits are best to munch on,” added Merkel who is free to pursue her first love of chemistry in Ibiza, a location filled with fellow chemistry enthusiasts.