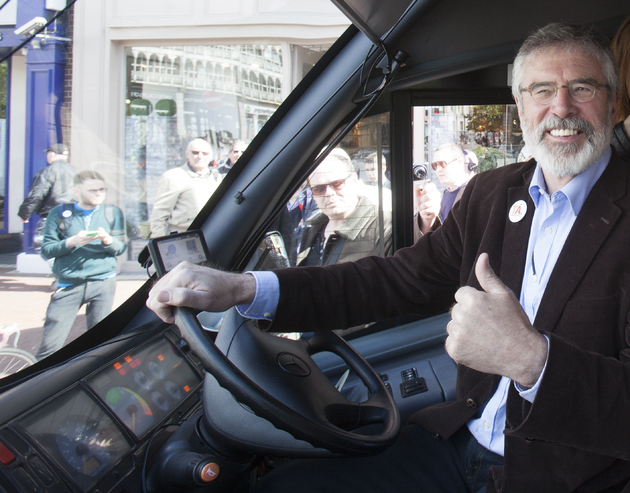 AS Ireland, Northern Ireland and the UK continue to be distracted by Brexit and negotiations, headed by Michelle O’Neill and Arlene Foster, to form a new Stormont Assembly, it is believed Sinn Féin President Gerry Adams smuggled the county of Armagh south of the border under the cover of darkness.

Placing the 1,326 km² county under a loose fitting jumper and going by the back roads, it is alleged Adams drove south to his Louth home hoping to make use of Ireland and Northern Ireland’s soft border while it was still in place.

“We can confirm that the alarm was raised by a member of the public after they spotted Slieve Gullion poking out of a car driven by a bearded man in his 60s at approximately 3am last night,” the PSNI and Garda Síochána said in a rare joint statement.

“Brexit, the negotiations, International Women’s Day, the run up to Paddy’s Day, Tuam, that Barcelona match, we all got a little distracted… we should have seen it coming,” the police forces added.

Serious questions will be asked of forces monitoring the border as they failed to spot the roughly 145,000 population of Armagh in transit under Adams’s jumper, believed to be XXXXL in size.

While it is not yet clear if Adams plans on smuggling more counties south in the future, Unionists have attached large bike locks on Fermanagh, Down, Antrim, Tyrone and Derry just to be safe. Searches for Armagh in a number of abandoned industrial estates in the Republic has failed to result in any leads.

Elsewhere, British PM Theresa May has not ruled out placing Northern Ireland on ebay in search of the best possible price in the event of a stalemate in the Assembly negotiations.