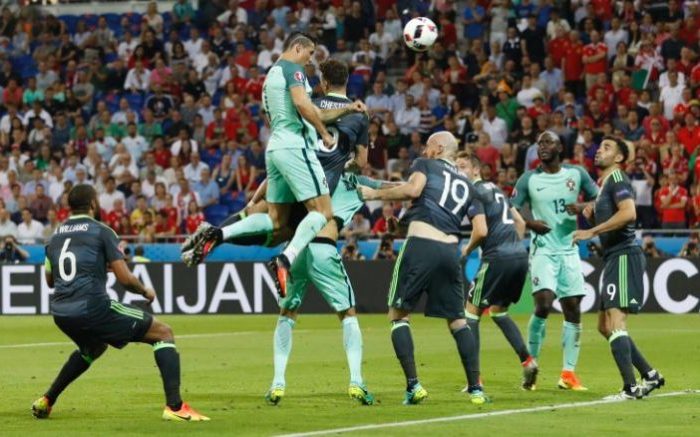 WWN is here to put boot to ball and bring you all the latest from our daily Euro we honestly can’t take the idea that Ronaldo could lift the trophy on Sunday.

Lyon was the scene last night for the grand unveiling of Ronaldo’s new haircut and as part of the launch the Portugal captain agreed to an exhibition match with Wales afterwards.

Wales are now headed home after their Euro odyssey was ended by goals from Ronaldo and thriller era Michael Jackson.

After falling behind to two goals in quick succession in the second half, Wales unveiled innovative new tactics called ‘give the ball to Bale’ which saw the Real player shoot multiple times from 80 yards out.

Orders for the Nike boots Ronaldo was wearing last night have increased by 2,000% after slow motion replays of the Madrid player’s soaring header revealed evidence of the new spring-loaded heel technology pioneered by NASA in conjunction with Nike.

Pepe will return for Portugal in the final in order for Portugal to adhere to UEFA’s ‘two-bastard minimum’ rule which requires teams to field at least two players football fans hate on an intense and often irrational level.

A touching moment came at the full time whistle when Gareth Bale and Cristiano Ronaldo could be seen embracing. Fans’ hearts melted as they were aware that despite being incapable of feeling any human emotions, Ronaldo was trying his best to look like he had some.

Irish fans who were cheering on Wales last night will now change tact completely and pray a semi-final defeat like this will completely crush the talented and tight knit group of players in time for when Ireland meet them in the World Cup qualifiers.

On the punditry front concern was expressed for the RTÉ panel of John Giles, Liam Brady and Eamon Dunphy after they chose not to completely obliterate what is an average Portugal side, instead choosing to do something they referred to as ‘praising them’.

RTÉ have yet to provide an official definition of what ‘positive punditry’ means or whether it will become a common feature.

Tonight’s second semi-final sees Germany play hosts France, with so much flair and attacking talent on display from both sides, football fans are fully expecting the match to descend into a cagey and boring 0-0 which will be settled on penalties.