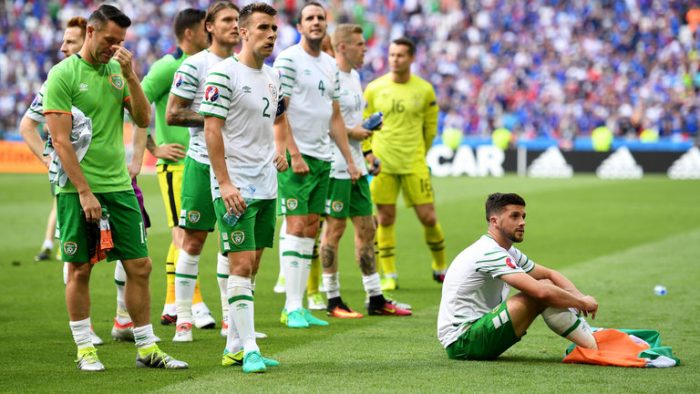 TODAY’S edition of WWN’s Euro round up sees the Irish backed petition for every football match to end after Robbie Brady scores a penalty reach 4 million signatures.

UEFA has apologised to everyone currently nursing a hangover in work, and vowed to make sure all Irish games in future tournaments take place on the Friday evening on a bank holiday weekend.

Ireland started with similar intensity shown against the Italians and the impressive display came undone after relentless pressure from a French team that got the surprise of its life when Jeff Hendrick was possessed by the footballing spirit of Zinedine Zidane for much of the first half.

Although the 4,000 Irish fans were outnumbered amongst the home support, the sound they made was equivalent to the noise made by 27 Muse headline gigs at Glastonbury. The green army set a new world record for number of ‘Olés’ sung at a sporting event, clocking in an astonishing 173,456 olés.

Referee Nicola Rizzoli was given the freedom of Ireland by Michael D. Higgins shortly after awarding Ireland a penalty in the opening minutes. Rizzoli will now receive a lifetime supply of Aran jumpers and Supermacs snack boxes.

Robbie Brady went on to convert the spot kick on the same day Lionel Messi missed a penalty for Argentina in the Copa America final. If you think WWN has made this point to somehow suggest Robbie Brady is better than the greatest player the game has ever seen, you would be wrong; how could Robbie Brady be better than himself?

Antoine Griezmann leveled things in the second half and as part of an exclusive 2-for-1 offer made available by the Irish team, Griezmann was given his second goal absolutely free.

In an attempt to turn the tide of the knockout tie, Ireland manager Martin O’Neill launched Jonathan Walters into action on the 65 minute mark with instructions to ‘be Jonathan Walters’, but it was tough for Ireland to get a foothold in the game after France a reverted to playing 10 men upfront.

Ireland’s goalkeeper Darren Randolph was a stand out performer for the boys in green, making several key saves while setting a new record for instigating thousands of man crushes over the 90 minutes.

Shane Duffy received widespread praise after his sending off, which the referee entirely misinterpreted as an act of malice.

Duffy, noticing that Antoine Greizemann was moving at a dangerously fast pace, the defender attempt to bring him to a steady and safe stop, reducing the risk of Griezmann overexerting himself and collapsing at a break neck speed. Despite being wrongly sent off for his kind intervention, medical professionals confirmed Duffy may well have saved Griezmann’s life.

It is believed FAI chief John Delaney worked through the night in effort to figure out a way to sue UEFA for Ireland’s loss in order for the FAI to be given some more hush money.

There were some other matches, in which some things happened that led to some teams winning and others losing, but what does life mean at all if Ireland are no longer the greatest football team?