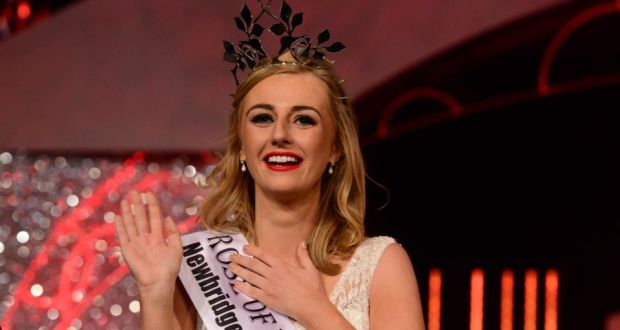 “I’m sweating, a nervous wreck. The fake tan is dripping off me like milk from a freshly squeezed udder. In the distance, beyond the floor laden with television cables and panicked stage hands trying to keep Dáithí Ó Sé from going off topic, I can hear the cacophonous sounds of limp arthritic wrists clanging together to form the world’s most unimpressive clapping. OK, it’s not Madison Square Gardens, it’s the Dome in Tralee, but the goosebumps rise in a sudden wave – this is it, I’m moments away from realising the dreams of thousands of women who truthfully should put a lot more effort into coming up with better dreams. This is Kerry. This is the Rose of Tralee 2015. Don’t fuck this up. Do. Not. Fuck. This. Up.”

How is it that, for a second week running, this 39-year-old father-of-three finds himself posing as a woman? Journalism, that’s how.

For years Ireland has gently chided the Rose of Tralee for its backward ways, but it was a long time to bring an end to this archaic pageant that was holding women back.

Ireland’s version of the Sexist Olympics would be torn asunder if I could just get to the heart of the machine and blow it up from within.

My preparation for this foray into a polite bit of equality vigilantism started at the turn of the year at the regional Rose of Tralee competitions.

It was a tough slog, as I failed to be selected as the Galway, Clare, Laois, Wicklow, Wexford, Roscommon, Kildare, Kilkenny, Meath and Westmeath Roses. Turning up at each competition ground down my self confidence, I questioned was I pretty enough.

My confidence had been so shattered that at one point I had to look up the definition of the word in the dictionary just to be sure again of what it meant.

We had been blocked at every turn, simply put, I wasn’t lovely enough, I hadn’t visited my granny enough (she was a right bitch who said I wasn’t pretty), I was not a primary school teacher. After much soul searching myself and the WWN team realised it would be far easier to just murder a Rose of Tralee contestant and take their place.

On a whim, we decamped to Cork and turned up at the opening of a new post office and low and behold there she was, the Cork Rose in all her splendor cutting the official ribbon with a comically large novelty scissors, working the crowd like a pro.

Once the regional Rose mania had died down I explained to her I was a journalist and could secure her a vital photo opportunity in the Irish Examiner with Ernie, the recently crowned best dressed cow in Ireland. I had gained her trust.

Thinking on my feet I grabbed the giant novelty scissors and brought them with me to an adjacent room where the Rose believed a dapper cow awaited her. Catching sight of the scissors behind my back, she let out a cry, startled by this I instinctively punched her in the face, dismembered her body, drove out to a nearby beach, sailed 3 hours out into the heart of the Atlantic and disposed of the body overboard.

Once arriving at the designated hotel of the Roses, everything turned into a blur. We, as Roses, were wined and dined, treated to round the clock offers of sex from our escorts, and I was interviewed by Ireland’s Own! Me, Mr. not pretty enough for his granny was interviewed by the premier granny’s magazine on the planet. I had not entertained the fact that I had the capacity to be lovely until now but maybe I truly was.

The night before the competition, we were warned not to make eye contact with Dáithí Ó Sé and never speak to him, he would only talk to us live on stage. His supply of cocaine was not to be touched.

In the middle of the night I was jolted awake by the soft murmurs of chanting, my room was now filled with the faces of my rival Roses. A knife was held to my throat and I was told in no uncertain terms that I was a suspected Protestant and they wouldn’t stand for my kind taking home the crown. They feared my loveliness.

The time came to take to the stage, and the previous night’s incident only further emboldened me to sabotage the entire show, bringing the contest down and exposing it for what it was, a pointless showcase for a 1950s ideal of what it was to be a good Catholic girl.

I was beckoned on by the distinctive culchie tones of Dáithí, at least I think was, the man speaks in tongues. And there, before the bright lights and a silent crowd, I was going to deliver my poem which would explode the myths of this embarrassment to modern Ireland. The words flowed effortlessly from my mouth, but the crowd was cheering. Why were these octogenarians cheering?

I had thought this assignment was about how I viewed the Rose of Tralee as sexist and outdated, but really I was just a 39-year-old man searching for the acceptance of the Nation’s grannies, because mine never loved me. I had come in search of confirmation that the Rose of Tralee was in need of destroying, but the only thing that was destroyed was my lack of belief in myself. I was a lovely girl after all.

I may have finished in last place, but Dáithí Ó Sé’s post-lap dance erection was the only victory I needed.