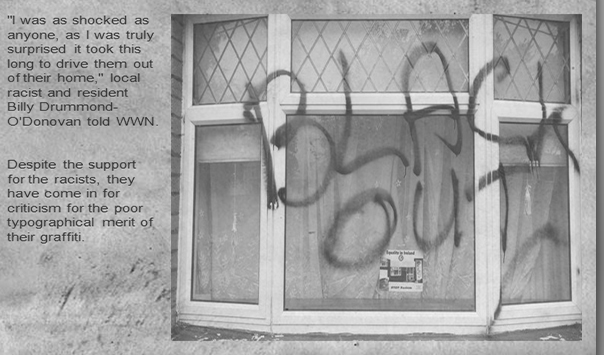 A DUBLIN family have been forced to flee their home following a sustained barrage of hate crimes, which have included the spraying of ‘blacks out’ in large black graffiti across the facade of their home.

Several individuals who have been critical of the public display of hatred for a particular race of people have been told to ‘shut up’ as this is Ireland in 2015 for Christ’s sake and if you don’t like it you should just feck off.

“Sorry, but I’ve news for you we don’t want to live in Ireland, where this sort of thing isn’t tolerated,” explained avid racist Aileen Purcell Plunkett.

Thankfully, this isn’t an isolated incident in Ireland and many individuals from minority communities will also feel the sting of persecution and isolation as a small but dedicated racist community band together in a moving display of unity.

“I was as shocked as anyone, as I was truly surprised it took this long to drive them out of their home,” local racist and resident Billy Drummond-O’Donovan told WWN.

Despite the support for the racists, they have come in for criticism for the poor typographical merit of their graffiti.