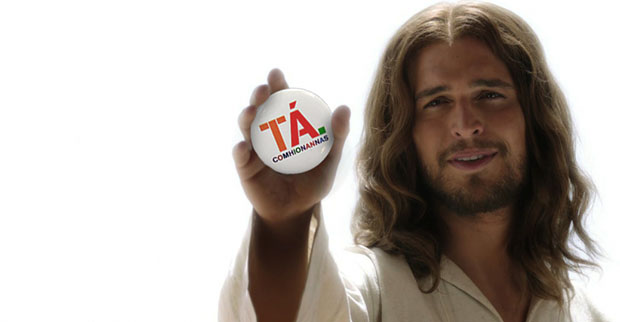 AS almost everyone knows by now, Jesus Christ sensationally broke his 2,000 plus years of silence to tell the public why he is voting yes in the upcoming marriage equality referendum. WWN has gathered some of his reasons below in a handy list.

1) Despite his reservations, Jesus admitted that the referendum is only about the question of equality and ‘I had a pretty good track record on that’. Although he understands Catholics who say ‘traditionally, marriage is between a man and a woman and has been for thousands of years, the Saviour pointed out that nailing people to a cross had also been a tradition at one point as was not giving women the vote, and treating black people like second class citizens.

2) Freddie Mercury is Jesus Christ’s favourite singer of all time and often accompanies the singer on piano in heaven, with ‘Don’t Stop Me’ being a particular favourite.

3) On his blog ‘Just Jesus Things’ the only son of God said that the fact the Law Society of Ireland has explained clearly that a yes vote will not legally alter the rights of the child has swayed him to the yes side. He also cites the fact that the Special Rapporteur for Children has reiterated that the ‘same-sex marriage referendum won’t change adoption in Ireland’ as well as an endorsement of a yes vote from leading children’s charities. He added that ‘someone who blindly ignores the testimony of experts when it comes to children, probably isn’t thinking of the children at all and merely trying to prop up their own conceited dogma’.

4) Jesus’s barber in heaven is a gay Filipino man named Greg, who has been dying Our Saviour’s roots for years and ‘seems like a nice, harmless guy’.

5) Jesus also disclosed that he was surprised the No side representative in an RTÉ debate last night on Claire Byrne Live, Senator Ronan Mullen, would be so vociferous about the importance of the rights of children in this debate, considering he was the former spokesman for the former Archbishop of Dublin Desmond Connell, who was heavily criticised in the Murphy report into clerical abuse for failing to report his knowledge of child sexual abuse to the Gardaí.

6) Jesus chose not to broach the emotional subject regarding the fact he had two dads, instead opting to explain some of his best friends are no voters, but that doesn’t mean he has to jump to conclusions without first knowing the facts like they often do.