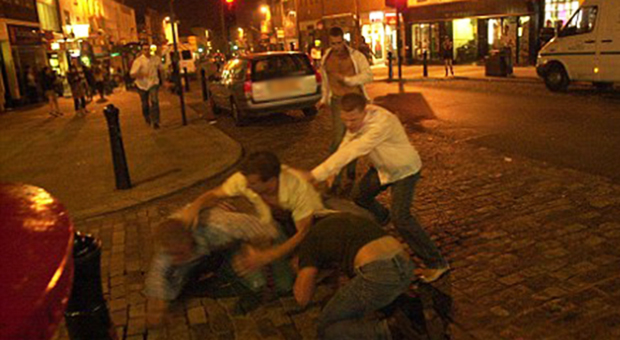 FIGHT fans from all across Waterford city centre are today eagerly awaiting Saturday night’s epic confrontation between random strangers outside Abra in the town centre.

The fight, which will settle the seconds-old dispute between the two yet to be determined parties, is expected to begin at any time between dusk and dawn, and be witnessed by dozens of some of Waterford most steadfast kebab fans.

Previous contests held in the hallowed fighting arena have led to some of the most spectacular and tragic battles in the history of Waterford city, with the famed 2007 bout between Liam Kennedy and some Lithuanian lad which lasted nearly 30 whole seconds, being one in particular that lives long in the memories of those who watched it.

“Saturday’s fight could be something pretty special,” said local man Kieran Carey, who sometimes wanders around town at the weekend when he’s shitfaced.

“It could be an evenly matched pairing of two burly fuckers lamping the bollocks out of each other, or it could be just one big lad knocking some puny young fella out cold with a single thump. Either way, drunken pride or just alpha-male bravado is on the line, so these guys are going to give it their all!”.

Times for Saturday’s feature bout have yet to be released, but people loitering around Abra are advised to check out the stacked undercard, featuring numerous smaller scuffles and altercations throughout the night.