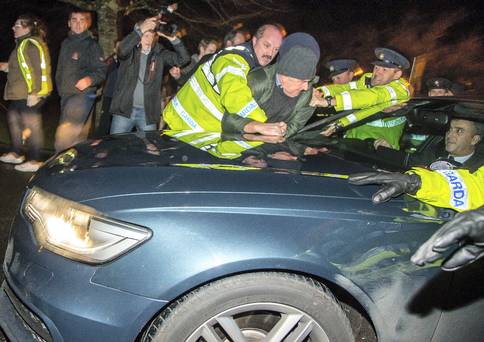 AFTER a day of backtracking on water charges and bonuses by the Coalition government, the Irish public swiftly responded by simply asking both parties to “just skip to the part where they abolish water charges.”

It is understood the Government will announce two new maximum rates of water charges tomorrow in a bid to quell tensions nationwide, which have heated up dramatically over the past five days.

Sources close to the Taoiseach have said he was very shaken after his car was surrounded by more than 400 angry protesters as he arrived at a Fine Gael party meeting in Sligo last night.

“This morning, Mr. Kenny immediately ordered his public relations people to ‘tell the press anything’ in order to get the nation off his back,” claimed the source, who wishes to remain anonymous.

Since arriving back today, the Taoiseach has stated there will be a new cap of €60 for a one-adult household and €160 for all other households.

At around lunch time, Mr. Kenny then ordered another press release claiming that Irish Water staff bonuses will be scrapped for 2014 and 2015.

“He was pulling out all the stops in fairness, but the echoes from the protesters outside were still to be heard down the Dáil corridors,” added the source. “In a last ditch effort he then passed a bill to cease the sale of the company to any private investors in the future, with the exception loophole of Denis O’Brien of course”.

“I think he realises now that his promises mean nothing to the people.

“It’s going to be lonely in the Kenny household this Christmas in Castlebar,” concluded our source.