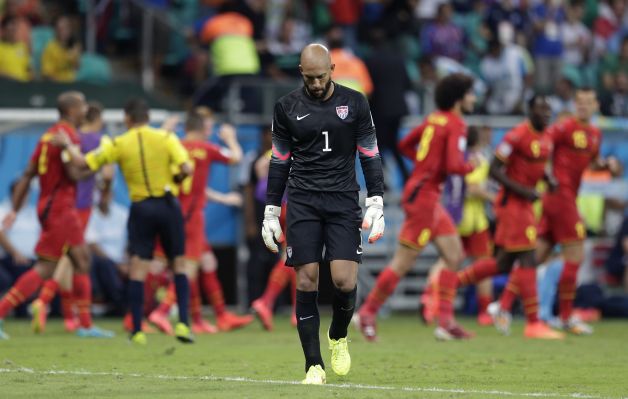 WWN has all the latest from Brazil.

With the round of 16 complete football fans must wait an agonising 48 hours before the quarter finals with many choosing unusual ways to cope. Some are openly lying to themselves pretending the tennis at Wimbledon can fill the void while others have taken sleeping pills in an effort to sleep through the 48 hour wait.

Argentina progressed to the quarter finals after beating Switzerland 1-0 in an unconvincing performance. According to NASA scientist and their latest research Messi can only be deemed as having produced a piece of ‘Messi Magic’ if he beats 8 players, winks at the camera, comes up with a witty catchphrase and scores from 47 yards out. Failure to meet this criteria means Messi is still the failure in an Argentina jersey we all know him to be.

RTÉ have announced a special DVD release ‘Kenny Cunningham: The Secret to My Positivity’ which set to be released as soon as the ex-Ireland captain smiles for the first time in 10 years.

A chance at the death for Switzerland player Dzemaili saw his header hit the post and rebound off his leg only to go wide. The RTÉ panel spent close to 170 minutes discussing how awful the miss was and the psychological impact it would have on Dzemaili. RTÉ were kind enough to send on a video of their discussion to Dzemaili who is currently rocking back and forth, crying in a room on his own.

WWN cannot confirm reports that head of FIFA Sepp Blatter only comes out at night, hates garlic and has no reflection.

The plucky USA side finally fell to Belgium in extra time last night. Tired American legs were exploited by substitute Romelu Lukaku who up this point had spent much of the tournament resembling a slowly collapsing block of flats. His influence on the game means Belgium will now face Argentina in the quarter finals.

Tim Howard was tested after the game by FIFA officials for secret additional arms as he made a record 16 saves during the game. FIFA are still waiting on the results.

Friday’s matches see Brazil take on Colombia in what promises to be an incredibly busy day for the cameraman whose sole job is to zoom in on attractive women. France and Germany are to renew old rivalries when they face each other in the early Friday kick off in which no football fan will mention France’s long love affair with surrendering to the Germans.