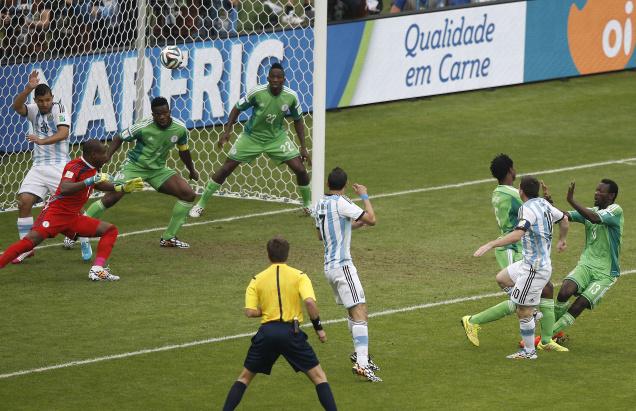 WWN has all the latest from the World Cup in Brazil.

RTÉ pundits Richie Sadlier and Kenny Cunningham engaged in intense debate in the aftermath of the Argentina game as they discussed the merits of water safety. Shocking footage showed Argentina striker Ezequiel Lavezzi throw over 24 gallons of water in the direction Argentina’s helpless manager Alejandro Sabella.

Cunningham refused to back down as he maintained Sabella was in grave danger of drowning and that the 4th official was nowhere to be seen. Thankfully repeated replays showed Sabella was wearing armbands. The debate between the two pundits was made all the more tense as they were also waiting on DNA results which would finally confirm the pundits are in fact long lost brothers.

Criticism was leveled at the feet of Lionel Messi once again, in an Argentinian shirt, he failed to impress. It took the sluggish striker as many as 120 seconds before scoring his first of two goals against Nigeria.

WWN cannot confirm reports that Sepp Blatter threw Michel Plantini into the trunk of his car, drove for hours deep into the Amazon rainforest and forced the former French captain and current UEFA president to dig his own grave.

Confusing scenes during the France and Honduras match as after receiving a blow to the head Ecuador defender Christian Noboa returned to the field of play with a bizarre white-netted headdress. It was later revealed that Ecuador’s team doctor had no actual medical qualifications and simply placed a novelty pair of tights on the player’s head in the hope no one would question it.

Switzerland are through to the next round after diminutive Bayern player Shaqiri scored a hat trick against Honduras. In an RTÉ production meeting late last night researchers worked round the clock to help John Giles correctly pronounce the Bayern player’s name. By the time of this article’s publication, Giles had said ‘Shakira’ 987 times.

Today sees USA play Germany in a match that would require a draw for both teams to progress. Portuguese coaching staff have sent a number of hurtful and distasteful letters, pretending to be from both teams, in an effort to stoke up a rivalry. The letters suggest that both USA and Germany view today’s encounter as the final say on WWII.

Ronaldo, aware of the limited prospect of Portugal progressing, has finally asked 10 other players to join him on the field of play later today against Ghana.

FIFA have called in the cast of popular TV show CSI to oversee the investigation into the apparent bite on Chiellini by Suarez. And when we say ‘apparent’, we of course mean blatantly obvious. The CSI investigation complete with cool music, fast-paced editing and lots of UV lights hovering over surfaces checking for various substances, will conclude sometime today.

Algeria and Russian face off later in a crunch game with rumours rife that Russia manager has called up Vladimir Putin to play the holding midfielder role in an effort to stem the attack of a dangerous looking Algerian attack.