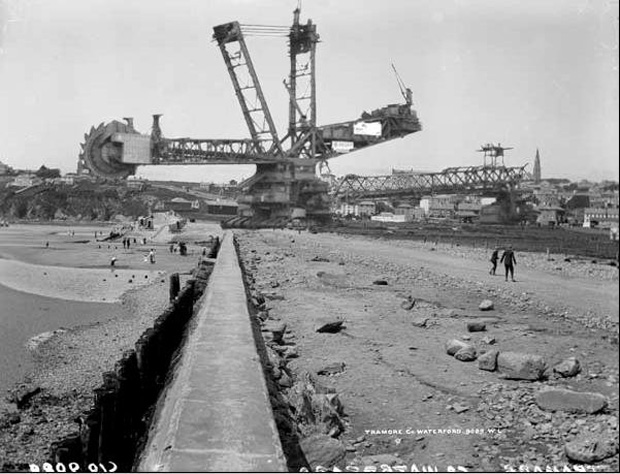 In 1875, the seaside town of Tramore was built in the space of three weeks by a Lord Doneraile. Before commencing work, Tramore was just one big marsh land that ran into the sea.

Lord Doneraile designed the town himself, erecting sand-dunes at the bottom of the man-made bay and building beautiful marble houses along the promenade. No expense was spared, and at the time the new town was nicknamed ‘Paradise City’.

A 14,000 tonne crane/tunneling machine was shipped in from the United States to carve out the vast beachfront which we know of today.

However, an estimated 200 men and women lost their lives in the building process due to its careless one-eyed driver called Gerry Pratchet.

Records state that not only was Pratchet the only person in the whole wide world able to operate the monstrosity, but he also held the Guinness world record for drinking 5 bottles of Vodka in ten minutes.

One Monday morning alone, he managed to crush 35 people who were just sitting on the prom eating their fish and chips.

Mr. Pratchet became a bit of a running joke around the town, driving him to even further depths of drunken despair.

People would tease his bad driving, stating that he drove like a blind woman and calling him Gerry Hatchet.

Finally, after a massive argument with a worker in a local pub, drunken Mr. Pratchet decided he was going to undo everyones hard work. He downed several bottles of whiskey and made his way to the giant machine.

Within four hours Gerry Pratchet destroyed every single house along the seafront, which is now known as the prom.

Realising what his emploee had done, a heartbroken Lord Doneraile made his way to a cliff beside the town and took his own life. The path later became known as ‘Donerails Walk’.

Tramore has been left in ruins till this day, with many locals now calling the town ‘The Irish Pompei’.