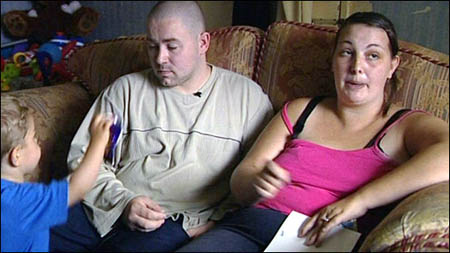 In an effort to avoid the heartbreaking moment where they have to explain how tough life really is poor people across the country will be doing their level best to make sure their children do not watch the Late Late Toy Show tonight.

Top excuses poor parents are expected to use are ‘oh no love, it’s on next Friday’, ‘I know what little Timmy said, but it’s not on this year pet, sorry’ and ‘c’mon you’re a smart kid, I have you dressed in rags – you’ll only be torturing yourself’.

Some of the more obscure excuses appear to include; ‘ah, it’s shit since Gaybo left’, ‘keeping the kids up til all hours to watch a creepy man play with toys? No thanks’ and ‘I’m not exposing my children to a stilted hegemony that reinforces the type of heteronormative behaviours that put this country in the mess its in now’.

While many impoverished parents have complained to the Broadcasting Authority of Ireland (BAI) none of their complaints have been upheld.

Joseph Manning from the BAI spoke exclusively to WWN about the Toy Show’s presence on the air.

As families grow more desperate to prevent their children from laying their eyes on some of this year’s most expensive and sought after toys one or two parents strike it lucky. “Sure, we had to sell the telly last week to pay for food,” shared a delighted father-of-two Declan Crowley, “so obviously I’m over the bloody moon”.