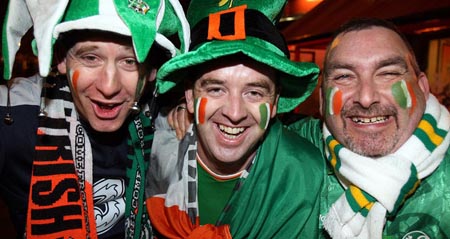 AHEAD of tonight’s game with Latvia there have been a number of reports suggesting Irish football fans are in a positive mood.

Following the appointment of Martin O’Neill as manager and Roy Keane as his assistant many of the supporters who usually stay in bed all day crying have gone as far as to buy tickets for this evening’s game.

Terry Doyle, spokesman for supporters group COYBIG, has confirmed to WWN that the group has issued a letter to its members.

“There has been quite a change in the mood over the last two weeks, but we issued some guidelines as we are just urging supporters not to get carried away,” shared Terry.” This ‘optimism’ can get the better of people if they don’t look after themselves. We had one instance where a member, in his 50s, became so filled with hope and happiness he booked a private jet to Brazil for his entire family.

“You’d have wanted to see his face when he was told just because Roy is back doesn’t mean we can change our position in the group table.”

Publicans throughout Ireland have also expressed concern over some of the talk taking place in their pubs. John Boyne, head of the vintners association of Ireland, told WWN of some troubling discussions.

“We’re of course very happy with peoples custom but when you hear some lads in the corner of a pub saying ‘O’Neill will turn Paul McShane into the best centre half in the world’ you know this is a real problem”.

Large sections of the Irish support have heaped praise on the magnanimous head of the FAI John Delaney for his recent efforts. WWN spoke exclusively to the Waterford native.

“Very pleased with the feedback now, but I had to look up the dictionary on that one, what is it again? ‘Optimism’ oh right, yeah. Listen, it’s early days, but yes of course we’re going to win Euro 2016”.

A recent poll carried out by Fifa showed that Spain topped the footballing nations in terms of ‘optimism’ sufferers.

It seems the Optimism epidemic has not extended to Roy Keane, as Ireland team doctors have confirmed he is one of a few people immune to the troubling condition.