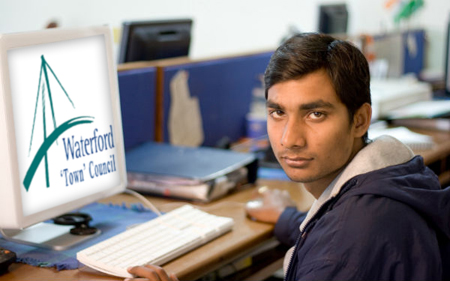 THE MINISTER for the Environment Phil Hogan announced today that Waterford ‘town’ council is to be out-sourced to India in a radical new overhaul by the state.

The cost-cutting plan will see a full transfer of all administrations to a small team of customer service operators based in the city of Mumbai, India.

As a result of the cut, staff will be reduced by 98%, saving the government a staggering €150,000, or three years Mick Wallace expenses.

Mr. Hogan said the current system in Waterford ‘town’ council will be totally abolished and replaced by a low-call number which will lead customers to a part-automated answering service.

Newly appointed Waterford town manager Akhil Kapoor told WWN earlier that he was excited about the new venture and welcomed the new business with open arms.

“We are very welcoming of many many future telephone conversations from Waterford people.

It will give my team of part-time agents a many great opportunity to practice their English and administration skills, and we hope to make the best decisions possible for your village.” said the 19-year-old medical student.

The Environment minister defended his radical plan to out-source the principal decision-making to the Indian office, stating that Akhil and his team are more than capable of deciding the towns planning, transport infrastructure, sanitary services and public safety.

“Its not exactly rocket science now is it?

“Those little brown fellas are smarter than they look you know. Give them a chance.” he added.

It is understood that office hours for the new town council are open between 7pm and 3am,  Tuesday to Saturday.