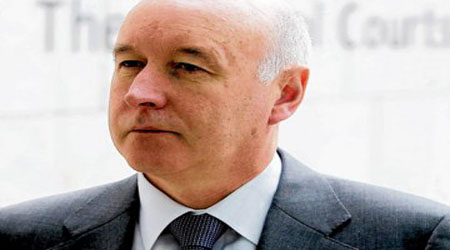 THE IRISH high court today said it is considering ‘on the spot fines’ for all sexual assault cases brought against the upper classes.

After a land mark case this morning involving aviation broker Anthony Lyons, Judge Desmond Hogan said the new approach will free up an already crowded prison/court system and enable the wealthy to keep spending their money on the outside.

“Jailing rich people will only hurt the economy even further.” explained the judge.

“Besides, rich people don’t re-offend, or get caught out a second time.”

If the move goes ahead,  the on the spot fines maybe issued by Gardai after a crime has taken place.

Mr. Hogan told WWN  earlier that the measure will hit the upper class offender “in the pocket — where it will really hurt, and keep the classes separate.”

It will also mean that any rich person arrested for exposing themselves in a public place can escape a criminal conviction on their record – by paying their fine.

This gives the rich the option of paying a fixed fine of €50,000 for a drunken sexual assault, or €150,000  for a full-on rape, instead of being prosecuted in a court.

However, not everyone agrees with the new proposal.

Lower class female, Mary O’ Something, said she was appalled by the move, stating it is not fair that the rich can just ‘buy their way out of trouble’.

“Just because we have NOTHING doesn’t mean we are NOTHING!!” added the silly peasant.