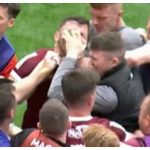 AN ARMAGH player has been praised for taking sportsmanship to a new level following a generous and thoughtful intervention during yesterday’s All-Ireland semi final clash between Armagh and Galway. While other players were overcome with a feverous competitive will to fight resulting in a large schmozzle on the pitch at the end of normal time,… Read more »