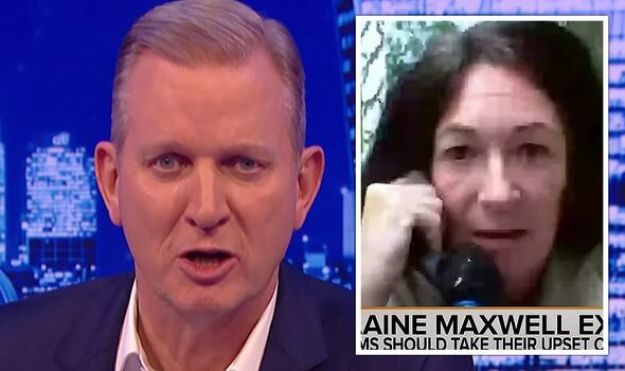 DESPITE the trauma associated with being subjected to an interview with Jeremy Kyle, convicted sex trafficker Ghislaine Maxwell used her TV appearance as an opportunity to blink Jeffrey Epstein’s client list in morse code.

“You can see here where she talks complete and utter bollocks about the Prince Andrew photo and ‘wishing I’d never met Jeffrey’ she’s blinking in a very deliberate and coordinated manner,” shared one TV analyst, who hoped Maxwell was keeping some names in reserve as leverage for not being suicided by prison guards.

“This is going to be great for business,” said one hitman-for-hire while trying on a prison guard uniform, fielding endless calls from very panicked and prominent politicians, celebrities and businessmen.

Outside of the blinking Maxwell frequently appeared less coherent than a flock of seagulls being spun around in a washing machine, but Jeremy Kyle soldiered on with his interview proving he had learned from his own past errors with vulnerable guests with substance abuse issues.

“I believe he was murdered,” said Maxwell during the interview, in perhaps the first true thing she has said in decades.

“Could she not have danced out the client list in a TikTok dance so we can all understand it? I honestly don’t think anyone knows Morse code anymore, it’s a lost art,” said one keen follower of the notorious sex trafficking case, searching online for a Morse code translator.

“Wait, who the hell are Tonald Drump, Mupert Rurdoch and Cill Blinton?” said one viewer, still getting to grips with their ‘Morse Code for Idiots’ book.

Elsewhere, an African American woman serving 30 years for possessing 10 grams of marijuana expressed an interest in discussing her case on a program with a potential worldwide audience in the millions.