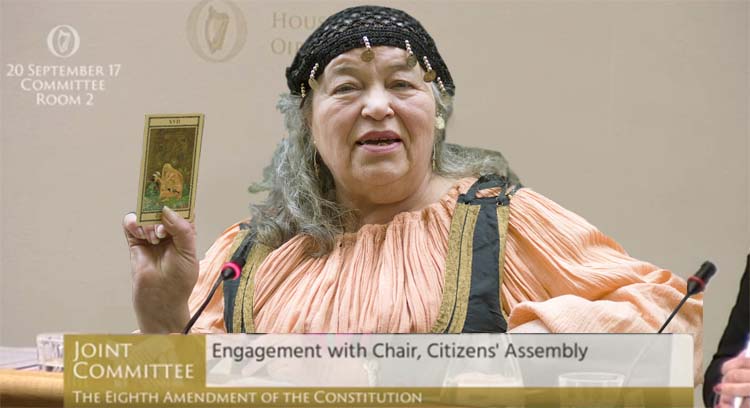 THE growing consternation of several pro-life members sitting on the Oireachtas 8th Amendment Committee has boiled over today after it was revealed there are no plans to hear evidence from a very credible blind mystic psychic, WWN can confirm.

“Experts such as mystic psychics, priests, someone who has Dr. before their name but not due to a medical career are all being turned away in favour of a disturbing and slavish devotion to verifiable facts,” warned one committee member, before threatening to improve the balance on the committee by leaving it.

Shelly Hannivanly, the well-respected mystic, has spoken of her own frustration at not being allowed to present her compelling testimony which is germane to the debate on the holding of a referendum on abortion in Ireland.

“While my sight was taken away from me, I can actually see into wombs and through my spirit guide, the late singer Michael Jackson, I can speak to unborn babies and provide their thoughts on the matter,” explained Hannivanly while walking into a wall to prove her lack of sight.

“What people need to understand is that this is a very delicate subject, and the committee owes it to the electorate to hear from all sides. I find it worrying they don’t want to hear, through me, from all Ireland’s children currently in the womb,” added Hannivanly, with a straight face.

The committee on abortion has been dogged by controversy since it began its proceeding by consistently parading qualified professionals and experts before the panel whose evidence had a worrying clarity to it.

“This panel is a whitewash of epic proportions, it’s wall to wall people talking about women like they’re people. We haven’t even heard from an American preacher via Skype call. Not once,” an irate pro-life Senator confirmed.