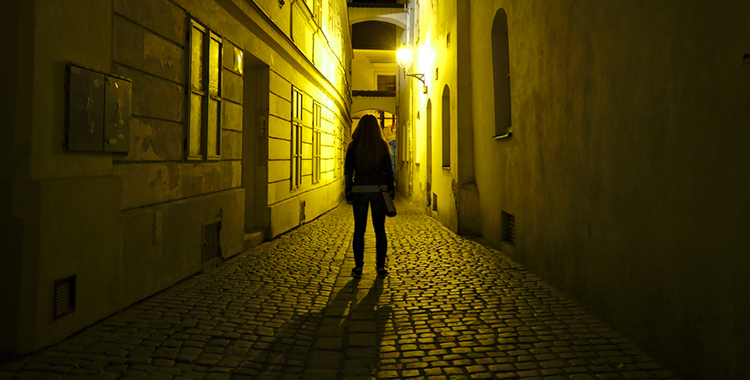 SUCH is the plight of being a woman at any point in the last several millennia or so, the constant fear and panic that washes over your body when you have to walk down a poorly lit laneway or street at night is an all too familiar feeling and experience, and it is also something you have to just accept and get on with, according to leading Twitter egg avatars.

However, WWN is on hand to provide you with a few ways to totally OWN completely shitting yourself at the prospect of having violence visited upon you by that guy walking in your general direction right now.

Remember, this is just how things are. You or someone you know has a horrifying story about something like this, but instead of seeking long term societal solutions like an idiot, you’ve got to man up. And what better way to do that than by carrying pepper spray, a taser, a knife, a gun and a set of nunchucks on you at all times. Grenades are optional but not recommended.

Not with people who are telling you to shut up about. Stop wasting their time. And not with the person belonging to the footsteps that are steadily treading behind you, Jesus, are you mad? They’re probably planning on attacking you as we speak. No, the solution to OWNING it, is much more straightforward. Make sure to have your phone on full battery any time you’re thinking of walking down a laneway at night, and that you have decent signal. Now text or ring someone you know, and let them know you’re just going for a nice stroll and fear you may never come back if the hundreds of stories popping up in your news feed are anything to go by. Check mobile phone networks for the best plan to suit your needs.

Don’t make a big deal about it

The women who truly own walking down laneways at night don’t tend to prattle on about how intimidating and frightening an experience it can be and how they carry the fear around their neck like some sort of anvil. No, to OWN, you’ve just gotta get on with it, no fuss. Should the council fix that broken light? Ah come on and stop your moaning. You’re always giving out.

NOTE: We are now legally required to mention that yes, men are attacked and assaulted too, thanks to a special provision in laws governing online publications, who as part of global network of evil feminazis, have in the past sought to deny every concern men have ever had over the course of human history.