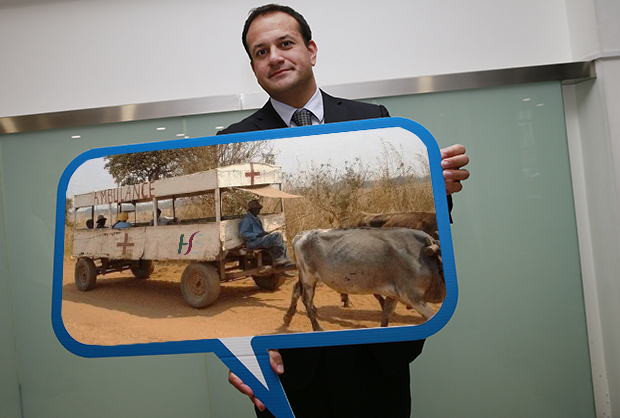 FOLLOWING a deluge of news items hitting the front pages in the past 24 hours, the HSE has once again reaffirmed its commitment to improving Ireland’s health service so that it can stand proudly alongside any third world country’s health service.

“We will continue with our endeavour to reach the high standards of those countries that have little or no money,” confirmed spokesperson for the HSE William O’Donnell.

With news of a nurse being jailed following the molestation of his patient, a doctor removing a patients’ womb without consent, a mental health services report into the suicides of 13 patients, the bribing of staff working in the private Beacon hospital and elderly nursing home patients not receiving showers for as along as a month, the HSE has had to put every effort into papering over the cracks.

“Those 198 news items which have circulated in the past 24 hours are, eh, well they’re not common at all, but with budget cuts we’ve had to stop giving a shit about a lot of things,” HSE manager of something or other Tony Gormley told WWN, “but you wouldn’t believe how close we are to getting to that coveted third world level”.

“We’re not saying it will be easy, but with a bit of luck on our side, patients could be looking to a real upswing in the standard of care we provide, I mean, we could even move ahead of Niger, Haiti and a few others,” added O’Donnell.

While HSE management admitted there was room for improvement, they refused to take the blame for absolutely everything that has happened, that is currently happening, or will inevitably happen.

Minister for Health Leo Varadkar is believed to be incensed by the barrage of bad publicity these stories have brought and the effect they have on the perception of the HSE as almost 12% functional.

“I had to cut off a carefully choreographed photo op for this shit,” minister Varadkar was overheard shouting at one the HSE’s 43,456 mid-level executives.

“What if I said the word ‘inquiry’ to you, would that sort it all out,” Varadkar added turning to the gathering media.