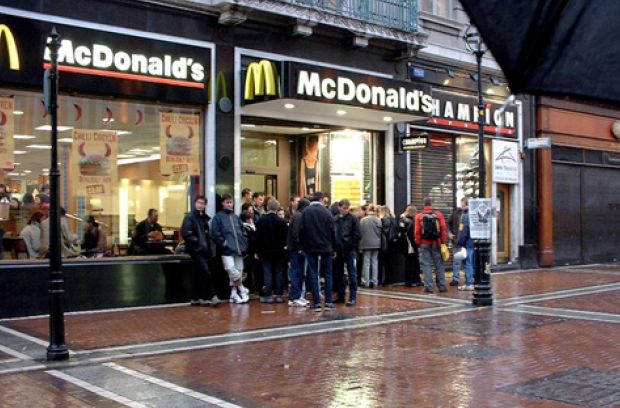 LARGE crowds gathered outside McDonald’s on Grafton Street this morning as the fast food giant was honoured for its services to drunk lads bursting for a piss.

A new plaque was officially unveiled by the Lord Mayor outside the men’s toilets, while several people who have availed of McDonald’s as a pissing option took to a small podium to share their heartwarming stories.

“Everywhere else open at that time needs you to buy something first, or worse still, it’s a nightclub and has a massive queue, I honestly don’t know what I’d do without this place,” shared Dubliner Daniel Ahern, holding back his tears.

Known throughout the years as an establishment that stays open into the small hours with a security team in place who have a lax policy when it comes to people darting into the toilet for a slash, McDonald’s on Grafton Street has saved thousands of young men from the indignity of pissing themselves, or worse still being arrested for public urination.

“There would be times I’d be running from College Green at 1.30am in the morning, but I’d be squeezing my bollocks so tight between my thighs, it was less of a run or more of an intense waddle, but there she’d appear – a neon beacon of hope on the horizon,” explained serial late night drunken McDonald’s pisser Michael Burns.

While McDonald’s has been rewarded for their services to late night Dublin revelers, their lax policy isn’t without its reasons.

“The intense panic someone feels when they think they’ll piss themselves, shortly followed by the euphoria of emptying it all out into a urinal is a potent mix,” explained Colin Green, a manager at the branch.

“The endorphins, which are released by pissing means that on their return to the main part of the restaurant, the pissing patron is effectively experiencing what is quite close to a huge natural high. Which is great for us because once they catch sight of our menus they are so over the moon, they splash out on half the food we serve here”.

A statue of a man urinating into a McDonald’s urinal has been erected in the middle of Grafton Street outside McDonald’s as part of the ceremony.