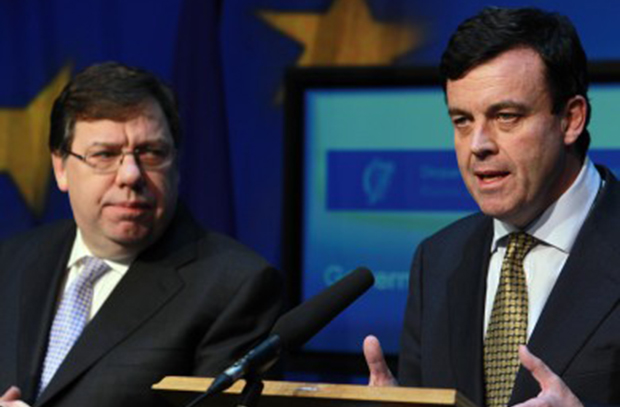 MEMBERS of the ongoing banking inquiry panel into the catastrophic collapse of the Irish banking system have started to suspect that all parties involved are trying to shift as much of the blame as possible on the dead guy.

The inquiry is focused on the events leading up to the decision to issue a blanket €440 billion guarantee of all liabilities in the Irish banking system on the night of September 30th, 2008, including Anglo Irish Bank.

The contentious decision led to the Government eventually seeking a bailout from the European Central Bank, saddling the taxpayer with a lifetime of debt.

After interviews with several key figures involved in the disastrous decision, the Committee of Inquiry into the Banking Crisis highlighted a disturbing pattern in which much of the blame is being shifted on former Minister for Finance and current dead person, Brian Lenihan.

While member of the committee are certain that Lenihan, who succumbed to pancreatic cancer in 2011, was a key figure in the economic downfall of Ireland, suspicions have been raised following testimonies which suggest he single-handedly ruined the country while everyone else begged him to stop.

“The one phrase that we keep hearing is ‘if Brian was here today, he’d tell you himself'”, said one observer.

“Everyone we’ve had before the committee has said the same thing; Lenihan fucked the whole thing up, despite best efforts by all parties to make him see reason. It’s unfortunate that the one guy who appears to have caused the downfall of the entire economy isn’t around to defend himself, and perhaps a little too convenient”.

The inquiry is expected to continue until the true story of the drastic failure of the Irish banking system is revealed to the public, which is not expected anytime soon.