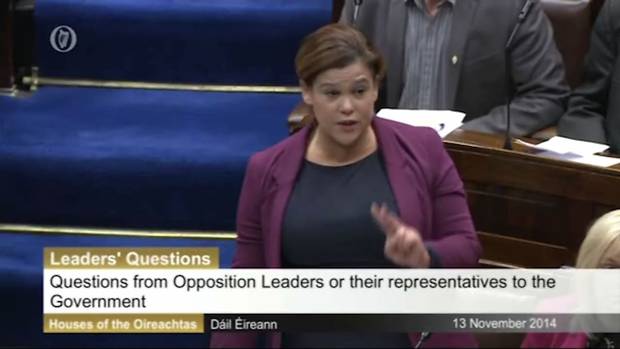 Shortly after 1pm yesterday as the heated debate between TD McDonald and Ceann Comhairle Sean Barrett reached its climax, McDonald hoisted herself over the Dáil benches and screamed “All right everybody be cool, this is a robbery. Any one of you fucking pricks move, and I’ll execute every motherfucking last one of you!”

A standoff ensued meaning Mary Lou had to act quickly with her first move being to order in 14 15″ Apache Pizzas, sticking it on her TD expenses.

In truly amazing scenes, this was the first non-alcohol related lock in the Dáil had seen since its inception in 1922.

The Ceann Comhairle tried to tell the Sinn Féin TDs that the chambers were haunted in an effort to scare them into leaving but to no avail.

In an underhanded and extreme measure the Ceann Comhairle then turned off the heat in the Dáil forcing all remaining Sinn Féin TDs to huddle together for warmth.

Sinn Féin retaliated by warning “it’s only a matter of time before we rub excrement on the walls”. We were only 12 minutes into the sit in at this point.

The shocking nature of yesterday’s sit in had only just begun as an ambulance was called to treat several Sinn Féin members who had complained of getting splinters from the Dáil benches lodged in their arses. At this point we can confirm no one died from their injuries.

The mammoth effort of the Dáil sit in took its toll on Sinn Féin as they were forced to bravely urinate into bottles as they persisted with their efforts. Moving scenes no one will forget.

The Government sought to bring an end to the sit in by confirming they would resume evading questions on Tuesday while Sinn Féin responded to people who claimed their sit in was simply a cynical ploy, stating that if they were in Gov they would also stage a Dáil sit in if an opposition party evaded questions on republican child abuse.

As we approached the 5pm mark concern intensified for Gerry Adams’s mental health as he began every sentence with ‘when I’m Taosieach’.

Our correspondents left the Dáil press gallery upon seeing Mary Lou McDonald firing up a karaoke machine ready to sing ‘I Will Survive’.

WWN will resume its coverage of Dáil proceedings on Tuesday.